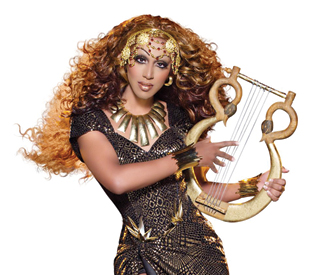 SUPER EGO The vivacious, vocal, and sweeter-than-sweet Honey Mahogany (www.itshoney.com) has graced the cover of the Guardian, sang at my wedding reception, and scraped me off the sidewalk outside Safeway innumerable times. But now that she’s “MISS HONEY MAHOGANY OF RUPAUL’S DRAG RACE SEASON 5” (premiering Monday, January 28 on Logo TV), I had to apply two months in advance for a 15 minute phone interview via her Beverly Hills agent. OK, OK, I could have just ambushed her at her new weekly Mahogany Mondays drag show at the revamping Midnight Sun (8pm, free. 4067 18th St., SF. www.midnightsunsf.com), but I wanted her with her “fame” face on, for kicks.

“It’s seriously a more-than-fulltime job being Honey Mahogany right now,” the Bay beauty practically panted. “If I think about everything I’m doing I’ll get overwhelmed. But the response has been so incredible — a couple of times at parties I’ve felt I needed a bodyguard!” And what would her dream bodyguard look like? “I just want to live that whole movie The Bodyguard,” she laughs. Has all the attention — and working with a catty cast — changed her at all? “I’m still sweet me, but if a queen crossed the line and went for someone I loved, oh, there was some reading.”

Besides releasing a single called “It’s Honey,” shooting videos, working on an EP, maintaining a social media empire, throwing a weekly party, and guest-hosting practically every damn party in the city — whew! — the “everything else” she doing, and why she really deserves this moment, is her day job as youth director at the Rainbow Community Center in Contra Costa, which offers HIV tests, counseling, a food pantry, and much more for an oft-overshadowed queer population.

But social worker selflessness isn’t the only way Honey can proudly claim to be first queen from San Francisco to represent us on the Race. “I channeled so much of what I learned growing up gay in the Bay for the challenges,” she said. “When we had to make something out of nothing, I thought of [drag fashion genius] Mr. David. And whenever something called for a different style, I had no problem, since the scene in San Francisco embraces everything from avant-garde to more traditional lipsync performances, and I had always been around all that, because it’s all in this family.

“In fact — you’ll see in the first episode — Rupaul pokes fun at me about being from San Francisco. But I’m proud to be a little bit gritty and a lot glamorous!” Well, good luck to you, Honey.

“Weirdo house, outsider artists, and underground pioneers,” is how Ghosts on Tape, one-quarter of the feisty-eared Icee Hot party crew (www.facebook.com/iceehot) categorizes the slew of awesome guests that have graced its tables in the three years the unpredictable party has thrown down, mostly at Public Works. This sounds, of course, like my kind of party — and for what launched as a joint devoted to some of the newer UK bass permutations crossing the pond via Internet, Icee Hot has grown into something much more fascinating: a full-fledged vibe. No decorations, no bells and whistles, cute but hardly groundbreaking flyer design, no distinct genre profile, an irregular schedule. But then: a packed floor, much respect, and a jaw-dropping roster of guest artists backed by the musically unhindered Icees (also including Shawn Reynaldo, Low Limit, and Rollie Fingers).

The Icees are blasting a two-part third anniversary party at Public Works (www.publicsf.com): Sat/19 sees dreamy R&B chopper Jacques Greene (yes from the Azaelia Banks video) and Dutch hyperdubber Martyn on deck. Part two on Sat/26 brings in alien techno soundscaper Space Dimension Controller and astral floor-pounder Basic Soul Unit. It’s gonna be a crazy couple weeks of great music — and if you hit this link before it’s too late, you can go to both parties for a mere $15: www.tinyurl.com/iceehot3.

An excellent prestidigitator. San Francisco man of many talents samples himself live, looping sounds he coaxes from soda bottles and tin cans into multi-genre journeys that lead you by the ear onto the dance floor, as if by musical magic.

Caught this intense (and handsome, hubba hubba) Brit techno-dubber when he was here a few months ago, right before his Luxury Problems EP dropped and cemented his reputation as one of the smartest electronic musicmakers going. Deep and hypnotic, but totally danceable, with a focus on industrial textures and maximum throb — should be perfect on Mighty’s soundsystem.

The SF Dirtybirder delivered my favorite moody bass mixes of 2012 — and he just dropped an awesome Soundcloud set called “Winter Jungle Mix” that’s doing wonders in pushing ahead the nascent drum ‘n bass revival. He’ll be working downlow wonders with the great J.Phlip, Leroy Peppers (a.k.a. the goofier side of Justin’s brother Christian) and Worthy at the Dirtybird label’s 2013 Winter Quarterly party.

The happy, unholy house-techno coalition of the Dubalicious and Freeform crews celebrates a sixer, with the Odyssey party’s excellent Robin Simmons joining Jonboy, Floorcraft, and many other SF faves on deck.