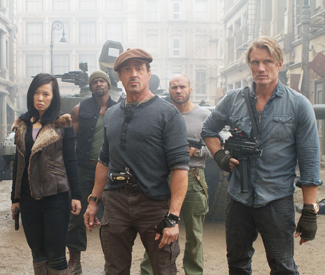 YEAR IN FILM Before Bruce Willis saved Bonnie Bedelia at Nakatomi Plaza, he was David Addison, detective-agency foil to Cybill Shepherd on Moonlighting. Then, after some multi-genre foreplay (1987’s high pedigree rom-com Blind Date, an iffy pop album), Willis charmed the pants off America in 1988’s Die Hard, sliding — gritty and glistening — down an air duct to escape the film’s fiery climax.

It’s been a hero’s journey ever since, so appropriately enough, the 57-year-old co-stars in next year’s G.I. Joe: Retaliation. According to the trailer, he’ll mow down villains triumphantly, then annoy some hottie with TMI about the pains of aging. Maybe Willis’ action-hero persona has come full circle, but the movies haven’t exactly evolved with him. With the exception of the mercifully MIA Steven Seagal, the 1980s’ biggest action stars spent 2012 doing the shtick they perfected long before latter-day idols like The Amazing Spider-Man star Andrew Garfield and The Avengers star Chris Hemsworth (both born in 1983, which makes them one year older than The Terminator and one year younger than First Blood) entered the third grade.

But unlike more spandex-y saviors, the leathery hunks who’ve been making films for a generation aren’t asking us to grow with them; instead, they’re growing old in front of us. (In The Dark Knight Rises, Christian Bale’s Batman is just pushing 40, but he spents half the movie in post-injury, old-man wobble mode.) If we wanna watch these guys be badasses, we’d better mind our touchy-feely instincts, because aging is rougher than a hailstorm of bullets and nowhere near as pretty. At least the flashy shit happens quickly.

Usually, an actor demonstrating frailty provokes viewers to confront their own weaknesses — the goal there is identification, poignancy. So what are we to make of the unstoppable Expendables series? The movies are as one-note as the best glossy shoot-’em-ups, which is relevant because Sylvester Stallone couldn’t have cast Willis, Dolph Lundgren, or Arnold Schwarzenegger as the cockroaches of the mercenary world without their stone-cold legacies. This epic Viagra ad of a franchise is built on the same single-mission structure of the classics that made its stars famous in the first place. The Expendables 2 pads its cast with Chuck Norris and Jean-Claude Van Damme (as a villain named “Vilain”) — but adds a “kid” (Liam Hemsworth) and a woman (Yu Nan) to the mix. Of course, the film atones for these updates making a plutonium mine the center of the film. (Also, it’s set in an old Russian military base — ah, sweet memories!)

But Stallone, Willis, and co. aren’t the only geezers attached to the aging-heroes trend. Think of Liam Neeson, sizzling anew at age 60 thanks to the Taken films. His career has only gotten hotter as he’s aged and started embracing lower-brow roles — does anyone look more fierce fighting wolves than Neeson? Tom Cruise, who turned 50 this year, doesn’t need a career reboot, even after Rock of Ages; his action-man streak continues apace with the upcoming Jack Reacher, plus 2013’s Oblivion and an inevitable fifth Mission: Impossible film.

James Bond may have shagged half of Europe, but he’s a lone wolf (no cubs) by design, and when the character turned 50 (current Bond Daniel Craig is 44), the plight of post-middle age was all his 23rd movie could talk about. Skyfall, a.k.a. The Best Explosive Marigold Hotel, features a Bond that fights for Britain and his own relevance at the same time — while the series does the same, making the bad guy a hacker and aiming for poignancy with a back story the 1960s Bond would have been too busy sexing around the globe to indulge.

According to the rules of the cowboy — speaking of, is Clint Eastwood still out there somewhere, talking to that empty chair? — the silver star goes to the next in line. But these cowboys ain’t going nowhere, no matter how many Channing Tatum clones start lurking around the box office. The Expendables 3 has already been announced (two words, casting directors: Nic Cage). No word if Willis is in that cast, but he does have G.I. Joe: Retaliation, Red 2 (another series about “retired, extremely dangerous” operatives), and A Good Day to Die Hard on the docket. Terrorists, Cobra Commanders, JCVD, wolves: 2012’s mature action heroes fear not these things. Their only true adversary is time. And possibly gravity.