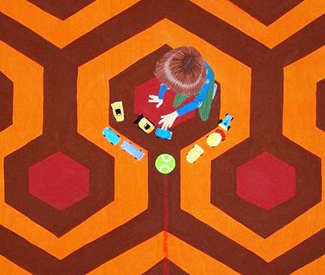 YEAR IN FILM “Oh — ninjas.” “Argo-fuckyourself!” Any number of unprintable exclamations from Django Unchained. After a silent beginning to 2012 — courtesy of Best Picture winner The Artist — the year in film has proven to be quite quotable, not to mention memorable and even celebration-worthy.

That first line, uttered with perfect nonchalance, is from Miami Connection, a 1987 martial arts-rock ‘n’ roll oddity plucked from obscurity by Drafthouse Films to live again at midnight screenings (locally, at the Roxie). A movie so uniquely terrible/wonderful that it’s been dubbed the heir to 2003’s The Room (speaking of perfect nonchalance, all together now: “Oh — hi, Mark”), Miami Connection is a time capsule not just of questionable ’80s hairstyles, but of an earnest joie de vivre the internet has all but rendered obsolete. If Miami Connection doesn’t make you nostalgic for the days of yore, when a Florida taekwondo instructor with a dream and a wardrobe full of sleeveless t-shirts could make a film completely devoid of winking self-awareness, nothing will. Miami Connection wants nothing more than to be awesome. And for that reason alone, it is.

That a 25-year-old movie about ninjas made it onto my top 10 list shouldn’t suggest that 2012’s new releases were lacking. I can’t tell you how many times I’ve started writing a year-end essay and realized the theme was something along the lines of “The Year Movies Sucked.” This year, there were films like Holy Motors and The Master — creative achievements that were also intellectually challenging, superbly acted, and dared to walk the razor wire between entertaining and disturbing. There was a charming, daring indie that somehow earned appreciation from the masses (Beasts of the Southern Wild), and a pair of intense, suspenseful movies that somehow made the CIA something to root for (Argo, Zero Dark Thirty). There was a stirring, iconic performance by a legend who has stubbornly stayed an actor while his peers have swelled into movie stars (Daniel Day Lewis in Lincoln); and a funny, heartbreaking performance by a young talent on the rise (Jennifer Lawrence, whose is the only reason the flawed Silver Linings Playbook made it onto my favorites list.) And Quentin Tarantino’s best film in years — the deliberately over-the-top, gleefully offensive, zoom-lens-laden, and often hilarious Django Unchained.

But 2012 wasn’t all delight and awe. Multi-screen venues struggled to attract audiences with ever-more lavish 3D and frames-per-second witchcraft. Locally, both the Lumiere and Bridge Theatres closed their doors (elsewhere, fortunately, the Roxie achieved a major fundraising goal, the Vogue celebrated its 100th birthday, and the Castro continues to thrive).

Worst of all, a mass shooting — tragically, not the only such event this year — claimed 12 lives at a midnight screening of The Dark Knight Rises. Hollywood, which earlier in the year had renamed a movie (The Watch, instead of Neighborhood Watch) after Trayvon Martin’s death, delayed the release of a film called Gangster Squad, which featured a shootout in a movie theater.

Though some of its opening-weekend hype was rightfully muted after the Colorado killings, The Dark Knight Rises — a visually stunning if thematically confusing (soooo, are you anti-Occupy, or what, Batman?) blockbuster — raked in over a billion dollars worldwide. Its haul was second only to another comic-book film, Marvel’s The Avengers, as colorful and goofy as Rises was serious and moody. (Hey, there’s room for both kinds of superheroes.) But Rises is supposedly Nolan’s last Batman movie; there are already two Avengers-related movies slated for 2013, and only Odin knows how many Marvel will end up making. If the company’s Amazing Spider-Man was a non-event (and how many people still think Tobey Maguire was in that?), it was a $750 million event, so the webslinger will return, whether you like it or not.

And in case you’re plotting out your nerd-alert calendar for 2013 (as one does), there will be plenty to gnaw on: Guillermo del Toro’s Pacific Rim, a giant-monster movie already inspiring geek squeals on Facebook and beyond; Man of Steel (another crack at Superman, with Michael Shannon as General Zod); Star Trek Into Darkness (with Benedict Cumberbatch maybe playing KHAAAAAN); more Hunger Games-ing and hobbits; another Die Hard movie (A Good Day to Die Hard) and The Fast and the Furious 6 (title upgrade: 6 Fast 6 Furious); and another stand-alone Wolverine movie.

Surely there will be pleasures to be had among the above. But as 2012 proved, the most rewarding films are almost always the ones you have to make an effort to see, whether it’s planning a midnight date at a single-screen neighborhood theater, or keeping tabs on festivals — practically a weekly event in the Bay Area — to get the inside scoop on films making what might be their only local appearances. If you’re lucky enough to live in a place that loves cinema as much as we do, you can practically curate your own festival. And why wouldn’t you? Add ninjas if you dare.

2. The Master (Paul Thomas Anderson, US)

5. Beasts of the Southern Wild (Benh Zeitlin, US)