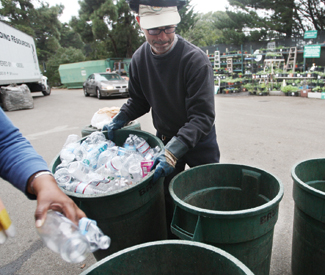 The unintended consequences of closing the Haight Ashbury’s only recycling center are about to ripple through small businesses in the neighborhood. As the recycling center’s final days loom, merchants are gearing up to face new fees — as much as $100 a day.

But they may get a reprieve sooner than they think.

State law requires stores that sell beverages in cans and bottles to take them back for recycling — unless there’s a functioning recycling center within a half-mile radius.

With the Haight-Ashbury Neighborhood Council recycling center gone, Whole Foods supermarket, the largest purveyor of beverages on Haight Street, will be faced with a decision — provide bottle and can buy-back services, or pay a $100 a day fee instead. If Whole Foods decides to pay the fee and not provide recycling in the area, small businesses in the Haight will be forced to make the same choice — only they won’t be able to afford the $36,500 a year fee.

San Francisco’s Department of the Environment doesn’t enforce those fees, but does provide oversight on recycling in San Francisco. Guillermo Rodriguez, spokesperson for the department, said that his office is in the planning stages of creating a mobile recycling center, which could roll out in early 2013.

“Certainly it’s not in our interest to have those businesses pack up and move out,” Rodriguez said. The mobile recycling center gives the neighborhood a new option.

If a recycling center serves the Haight neighborhood, the small businesses in the area could avoid paying the steep fees, and from having to go through the trouble of seeking exemption.

“Its similar to food trucks,” Rodriguez said. “After they finish for the day, they leave. But they’d set up at a usual time in a usual spot.”

San Francisco Supervisor Christina Olague, whose district includes the Haight Ashbury, said she was working on a way for HANC to turn into a mobile recycling center. Though she said that those talks had since stalled, Rodriguez said that if HANC wanted to be a partner in the new mobile center, the Department of the Environment would be open to it.

Why does the state of California expect small businesses to provide a can and bottle buy-back program on site, or face fees in the first place?

Rodriguez explained that the laws weren’t necessarily made with San Francisco in mind.

“When the rules were drafted, San Francisco was the exception, as we are for a lot of things,” Rodriguez told us. “The law was written for the suburbs, where small businesses generally have parking lots where recycling can easily be handled.”

The San Francisco Recreation and Parks department has long pushed for the Haight recycling center’s ouster. Sarah Ballard, spokesperson for the department, said the recycling fees and regulations that will hit local businesses aren’t Rec-Park’s problem.

“HANC has been on a month to month lease for over a decade,” she said. “The Parks Department have never sought to stop them from seeking non-park property to continue to run their business.”

Basically, HANC can operate wherever it wants to — just not in Golden Gate Park. And there aren’t a whole lot of other low-cost open spaces where the center can set up shop.

Small businesses we’ve talked to say they don’t have the space, staff, or ability to handle buying back recyclables. Fred Kazzouh, owner of “Fred’s New Lite Supermarket” on Haight and Masonic streets, doubted he’d get a reprieve from the fee.

“I mean if we all apply for an exemption, there’ll be half a mile radius without a recycling center,” Kazzouh said. “I saw recycling centers on Safeway on Webster (street) and I don’t see why Whole Foods can’t do it.”

Kazzouh’s store has been in the Haight neighborhood since 1995. The Haight has long been known as a place that draws alternative people, he said. And that’s the way he likes it.

“I don’t like to be in the clean neighborhood with the white picket fence and suits and ties,” Kazzouh said. “That’s not a real life. Its a very fake life.”

Even some of the ritzier stores along Haight St. aren’t bothered by the homeless population there. Firras Zawaideh, owner of Liquid Experience on Haight, sells high end (expensive) alcohol that few homeless people can afford.

He said he thinks only the transplants and new folks to San Francisco are bothered by them.

“I’m a native San Franciscan, from the Sunset [district],” Zawaideh said. “We’re the ones who don’t hate the homeless. Its all the transplants from New York and the midwest who complain about it.”

Zawaideh already handles bottle and can buy-back through his store, though he said that no one has ever taken advantage of it. But with HANC closing, he dreads the idea of people bringing cans and bottles en masse to his store.

“Say on a busy Friday night someone comes in with a cart full of recyclables,” he said. “Then what? I have to help them out too?”

The mobile recycling center would exempt Zawaideh of that responsibility. But if neighbors of HANC complained about the homeless population, would the same customers cause a problem for the mobile center as well?

Rodriguez said he wouldn’t speculate on if the homeless population that now uses the Haight recycling center would follow the food trucks around as well.

“I think we’ll have to take it as it comes,” Rodriguez said. Though he wanted this to be clear: “Not everyone that participates, frankly, is a homeless person.”

Fred Kazzouh was dubious that the homeless population would go away with HANC’s closure. “If HANC goes away, the homeless won’t go with them,” Kazzouh said. “The homeless will just have less people fighting for them.”