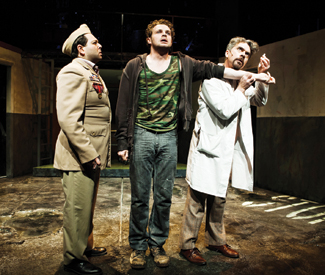 THEATER Cabaret, The Threepenny Opera, Macbeth — Berkeley’s Shotgun Players has a record of bucking the feel-good trend in holiday shows. More often than not, this comes as a welcome reprieve from the exhausting regimen of glib seasonal cheer. This year marks a case in point, as director Mark Jackson and the company mount the Bay Area premiere of Tom Waits and Kathleen Brennan’s musical adaptation of 19th century German literary giant Georg Büchner’s Woyzeck. This version was originally conceived and staged in 2000, in Denmark, by American avant-garde director Robert Wilson (part of another creative triumvirate behind October’s revival of Einstein on the Beach at Cal Performances).

Although written in 1836, Woyzeck (inspired by an 1821 murder trial) feels utterly contemporary at its core. It’s the story of a poor, half-addled, half-haunted soldier who kills his faithless lover. Woyzeck (played by an aptly harried-looking, volatile yet achingly sympathetic Alex Crowther) just barely supports his girlfriend Marie (Madeline H.D. Brown) and their infant child by working as a servant to the local Captain (Anthony Nemirovsky) and by submitting to medical experiments at the hands of an avid Doctor (Kevin Clarke). Marie, though she seems to love him, is clearly troubled by Woyzeck’s erratic behavior: symptoms of what today would be labeled PTSD. In Woyzeck’s absence she succumbs to the seduction of a predatory Drum Major (Joe Estlack). Driven into a rage of jealousy and despair, Woyzeck stabs her to death. (Andy Alabran as dim-witted neighbor Karl; Kenny Toll as Woyzeck’s half-sympathetic pal Andres; and a mellifluous Beth Wilmurt as neighbor and prostitute Margaret round out the cast.)

Woyzeck is technically an incomplete work: Büchner died of typhus (at a mere 23 years of age) before he could complete the play, as the brilliant young writer, medical student, and devoted pupil of the French Revolution was trying to stay one step ahead of arrest for his social revolutionary activities. Nevertheless, the work he left behind has a definite shape and integrity to it that have made it an irresistible part of the modern canon since its first production in 1913 — a prescient year for a prescient play, whose jagged edges, violent laughter and harrowing visions anticipate our own time and the dehumanizing machine that gets underway in earnest with the mechanized slaughter of 1914–18.

Woyzeck, the worried lover, is also the lowly servant-slave-guinea pig of hubristic, ridiculous, hypocritical authority. Although stressed and bemused by the Captain (played as a bloated man-child in Nemirovsky’s spirited interpretation) and the Doctor (a maniacally cheerful deviant in Clarke’s finely sculpted performance), Woyzeck nevertheless manages moments of penetrating insight into the corruption of the “moral” order around him. Marie’s pure-hearted vitality, meanwhile, underscores its own impossibility in an inhuman regime of naked exploitation — one only made possible, it seems, by an ideological smokescreen of “enlightened” values, progress, and moral uplift (concentrated, of course, in the wealthy).

The tale of this hapless soldier becomes a deeply resonant murder ballad in the hands of Waits and Brennan, a poignantly tragic love story that encompasses a wider wicked world in every beat and snaking melody. From the resounding opening theme, “Misery Is the River of the World,” the music proves broodingly brilliant in its unfussy and crystalline poetry; alternately lilting, inebriating, and delicately forlorn in its inexorable pulse. An impressive five-member band (billed as Bob Starving and the Whalers) discharges its task with aplomb. Comprised of multi-instrumentalists Cory Wright, Josh Pollock, (musical director) David Möschler, Ami Nashimoto, and Travis Kindred, the band perches on the second tier of Nina Ball’s grimly urban split-level set behind the louche partition of a beaded curtain. The cast, meanwhile, renders respectable, if rarely exceptional, vocal treatments throughout. But the music is compelling enough that respectable works quite well.

Jackson (a Shotgun company member, and the principal conspirator behind last season’s worthy premiere, God’s Plot) takes a sure and playful approach to the staging, which pays off dramatically in several scenes (especially those involving the excellent performances by Estlack and Clarke). But the staging (including the costuming by Christine Crook) proves gratuitously naturalistic at times, drawing our attention in distracting directions through certain overloaded signifiers of status, like a fast food bag or, less intrusively, a candy bar that substitutes for a cigar (hey, sometimes a cigar is just a cigar). The almost perfunctory attempt to ground the action in an immediate American context also flitters across some of the line delivery, albeit only slightly, as when Marie (a generally solid and enchanting Brown) sings, in “A Good Man Is Hard to Find,” of forgotten soldiers from forgotten wars. While it may make perfect sense at one level, the production’s self-conscious emphasis on the here and now can also muddy the waters of a work that otherwise peers deep into the abyss of a much wider sea. *