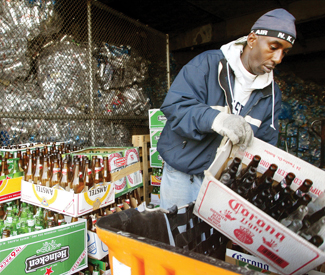 So much for the holiday spirit.

In a win for the NIMBY neighbors of the Haight neighborhood, the Haight Ashbury Recycling Center was gifted with its final eviction notice, ordering it out on the street by the day this story goes to print, Dec. 5.

But those who hoped this eviction would rid the neighborhood of poor people recycling bottles and cans may be disappointed — and so might local small businesses that could face some unintended consequences of the move.

The site, run by the Haight Ashbury Neighborhood Council (HANC), houses a community garden, native plant nursery, and recycling center. HANC battled eviction for nearly a decade as newer neighborhood associations complained to the city, saying the center was too noisy and attracted too many homeless people.

The recycling center is located at the edge of Golden Gate Park behind Kezar stadium, and has been crushing cans and busting bottles since 1974.

The San Francisco Recreation and Park Department issued several eviction notices to HANC over the years, and the process seemed to drag on, but the eviction notice from the Sheriff’s Department on Nov. 28 is likely the last nail in the coffin.

Even Sup. Christina Olague, who has championed HANC as one of their few supporters on the current Board of Supervisors, said that the recycling center was done, although representatives from Sup. Eric Mar’s office told us they were still hopeful the eviction could be delayed long enough to relocate HANC somewhere else.

Olague told us that she’d talked to Mayor Ed Lee about the issue many times, and they discussed many options. But with the finality of the eviction notice, she said, “I just don’t know what we can do.”

The recycling center’s employees will lose their jobs just at the start of the winter holiday season. “The notion that they’d put people out of work before Christmas was horrendous,” Dunn said.

What will happen to HANC’s 10 employees is up in the air. “I have no idea what I’ll do,” HANC employee Brian McMahon told us, lowering his orange protective headphones to talk. He’s worked there since 1989, and his last job was at a Goodwill store. “The quote under my high school yearbook picture says ‘take it as it comes,’ and that’s what I’m going to do.”

Susan Fahey, the sheriff’s media relations officer, declined to discuss the details of how the officers would handle the eviction, saying only that “we plan accordingly.”

A staff report prepared for the Recreation and Park Commission’s Nov. 20 meeting estimated that just 0.1 percent of San Francisco’s recycling tonnage is processed at HANC, according to a report by citizen journalist Adrian Rodriguez. The agenda also said that the Department of Environment was confident that recyclers would use other nearby sites instead.

But the customers at HANC that we talked to didn’t agree.

“I think it’s necessary they have the [recycling center] here,” HANC customer Eugene Wong told us. Wong lives in the Haight, and hauls in his recyclables every six months or so for some extra pocket money. As Wong and his friend Bob Boston spoke, one of their Haight Ashbury neighbors, Rory O’Connor, surprised them as he walked up.

“Just droppin’ off my beer cans, man,” O’Connor said. Asked if he would make his way out to the Bayview recycling center when HANC closed, he said, “You’ll spend more on gas than you would even get back.”

There were quite a few neighborhood locals there that day, and more people drove into the recycling center than there were people pushing shopping carts. But it’s the folks with the shopping carts that had HANC’s opponents up in arms.

And though some — like Chronicle columnist C.W. Nevius, a regular critic of HANC — are celebrating HANC’s demise, the unintended consequences should have all small businesses in the Haight Ashbury worried.

State law requires that Californians have easy access to a “convenience zone,” basically somewhere nearby that they can collect the five-cent deposit all consumers pay for cans and bottles. HANC served that purpose for a half mile radius around its location on Frederick, near Stanyan.

“Whole Foods and Andronico’s were serviced by HANC’s existence,” Regina Dick-Endrizzi, the director of San Francisco’s Office of Small Business, told us. With HANC gone, “They will be required to buy back [bottles and cans] from local stores.”

San Francisco’s Department of Environment oversees recycling policy in the city, but did not respond to calls or emails.

The reason that HANC was being pushed out was due to a vocal few, like the Haight Ashbury Improvement Association, complaining that HANC was a magnet to the homeless population looking to sell bottles and cans collected in shopping carts. That group didn’t respond by press time. Now those same poor folks may take their business from Golden Gate Park to the Haight neighborhood itself by recycling at the local Whole Foods, the new legal alternative to HANC.

Sometimes local grocery stores defy the state mandate, and instead choose to pay a state-mandated fee, Dick-Endrizzi said. If Whole Foods chooses not buy back recyclables, small businesses all over the Haight will be required by state law to do it themselves.

Suhail Sabba has owned Parkview Liquors on Stanyan Street, just two blocks from HANC, for nine years. He said that he doesn’t have the employees, storage, or scale “to handle even a portion of HANC’s customers.”

He may not have much of a choice. If small businesses don’t buy back the recyclables, they would face charges of $100 a day under California state law. A year gone without complying would lead to charges up to $36,000, an amount that large-scale businesses often factor into their budgets, but which could bankrupt a small store.

When contacted, Whole Foods representative Adam Smith said that the company was aware of the issue and was still deciding on a course of action.

The company has a 60-day grace period to make a decision that, for good or ill, would ripple through the Haight neighborhood. “I might go out of business,” Sabba said.

Store owners can apply for an exemption, but the process can be as lengthy as a few months and fines could still accrue, Dick-Endrizzi said. The Office of Small Business will soon reach out to the affected store owners, but she encourages them to contact her office directly at 415-554-6134.

GARDEN FOR A GARDEN

The HANC site houses more than the recycling center. It also encompasses a native plant nursery, run for the past decade by caretaker Greg Gaar, who we’ve profiled before (“Reduce, reuse, replace,” 5/30/12). Gaar raises Dune Tansy, Beach Sagewort, Coast Buckwheat and Bush Monkey — all native plants bred from the dunes of old San Francisco, which Golden Gate Park used to be.

Adjacent to the nursery is a community garden with 50 plots serving just more than 100 neighbors. But the odd part is, when the city is done tearing down the recycling center and gardens, it plans to put in, well, another community garden, at taxpayer expense.

The new plan does offer a few tweaks. There will be a small stone Greek-style amphitheater, and removing the recycling center will leave more green space for the site. The new community garden will feature 10 fewer plots. As of now, there is no formal plan to transfer the 100 gardeners from HANC’s community gardens to the new plots once they’ve been built.

“You meet people you wouldn’t meet anywhere else,” said Miriam Pinchuck, a writer who will soon lose her and her husband’s garden plot at HANC. “It’s very shortsighted, and it’d deprive us of a chance to meet our neighbors.”

Though Dunn and Gaar are in negotiations with city officials on their gardners’ behalf, at this point it looks like the current gardeners will need to sign up for the new plots, just like everybody else.

Gaar looks like he may be the only employee to work at the new garden site once it replaces the recycling center. He’d have to volunteer, but he said that doesn’t necessarily bother him.

“For me, gardening is a joy,” Gaar said, although he did voice one concern: “I just want the nursery to survive.” With HANC’s eviction, it seems like everyone has something to worry about.