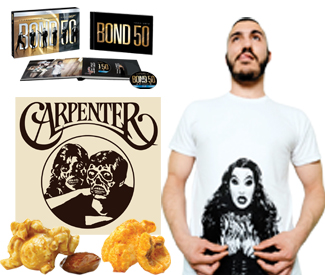 HOLIDAY GUIDE “Film fan” can mean many things: that guy who knows the name of every weapon in the Star Wars universe, the late-period Clint Eastwood apologist, the kid who dreams of being the next Joss Whedon, the woman who dresses like a 1940s femme fatale, or the neighbors who just named their new puppy “Kubrick.” What’s more, most people have some love for movies (or at least really good TV), so a cinematic gift is more or less a win-win situation as long as you make a slight effort to tailor it to the individual. Herewith, some ideas to get you started.

Bodacious Blu-ray box set Bond 50: The Complete 22 Film Collection goes from Sean Connery to Daniel Craig, compiling all the 007 flicks to date (with the exception of the current Skyfall, of course). Though not all Bond films are created equal (2002’s Die Another Day vs. suave 1960s Connery? No contest), the set would be a handsome addition to any space-age bachelor or bachelorette pad. For added impact, throw in a snazzy cocktail shaker and some martini glasses. Instant secret agent party!

For the Giants fan who’s already drowning in World Series memorabilia, why not splash out for one or both volumes of the ESPN Films 30 for 30 Gift Set Collection? The films in this Emmy-nominated series transcend typical feel-good sports docs to closely examine specific moments and important (or infamous) figures, with acclaimed directors (John Singleton, Barry Levinson, Barbara Kopple) contributing alongside up-and-comers. Each entry is different from the last, but all the stories are fascinating, focusing on topics as wide-ranging as the death of basketball star Len Bias, a New York City fantasy baseball league, fan love during the Los Angeles Raiders years (directed by Ice Cube), the friendship between Mike Tyson and Tupac Shakur, and the downfall of track athlete Marion Jones.

But maybe you don’t want to risk gifting any DVDs, since you’re not sure what the film fan in question’s collection already contains. To avoid any awkward, “Gee, thanks, but I already own the Deluxe Uncensored Letterbox Edition of Cannibal Ferox” moments ‘neath the mistletoe, seek out something completely unique. Visit the online boutique of local celebrity and film enthusiast Peaches Christ (store.peacheschrist.com) to pick up a t-shirt or tank top illustrated with an eye-catching image of Peaches herself (merry Christ-mas!) For another wearable option, check out the, pardon me, fucking amazing t-shirts offered by Los Angeles’ Cinefile Video (www.cinefilevideo.com), famed for tweaking band logos with names of famous directors — like, say, “Herzog” in Danzig font, with demon skull floating behind. The tees are highly popular and are therefore often out of stock, but as of this writing you can still pick up a Carpenters/John Carpenter/They Live mash-up in either black or cream. (I have the black one; it’s a real conversation-starter.)

With Peter Jackson’s The Hobbit: An Unexpected Journey coming out in December, consider guiding a younger reader back to the source with his or her own copy of the book. Naturally, there’s now a movie tie-in edition, but all that means is that the cover looks like the theatrical poster. For more Middle Earth fun, type “hobbit” into the search bar on Etsy.com, and you’ll find a range of gift ideas, from stocking stuffers (“Shire” scented candles, for pipe-weed aficionados) to big-ticket items, including a pair of Vans fantastically hand-painted with Bilbo’s likeness.

And what goes better with movies (and pipe-weed) than popcorn? San Francisco’s 479° Popcorn is organic and sold in dozens of Bay Area (and beyond) locations, like Rainbow Grocery, Bi-Rite, and even some swankier corner stores. You can also order it online (www.479popcorn.com). Flavors include black truffle and white cheddar, fleur de sel caramel, and Vietnamese cinnamon sugar. Sure beats the radioactive stuff they sell at the megaplex.

If the film fan on your list is local, consider investing in a membership to a local theater or cinema organization on his or her behalf — a rad gift for the recipient, and a boon to the venue or group you’re supporting. Members at the Roxie (roxie.com/support) get perks like free admission to regular screenings. Join the San Francisco Film Society (sffs.org/membership) for access to members-only events and the ability to purchase San Francisco International Film Festival tickets before they go on sale to the public. And San Francisco Cinematheque (www.sfcinematheque.org) members get discount admission to screenings and access to the group’s archives. All gifts that keep on giving, even when the lights come up.