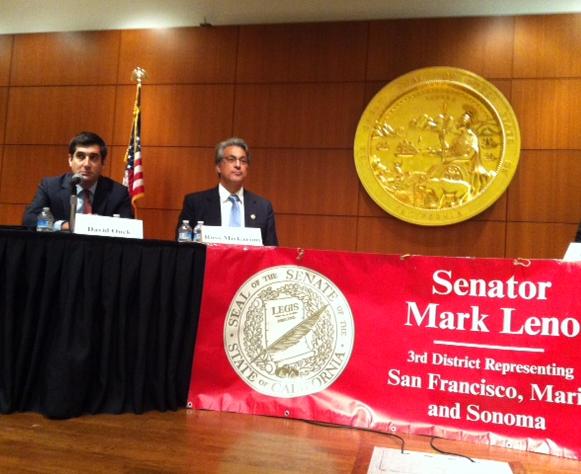 Gascon spokesperson Stephanie Ong Stillman minimized the decision to forego appearing on a panel with Mirkarimi, whom Gascon prosecuted for a domestic violence incident and continues to persecute with calls to resign or abdicate some of his official duties, telling us, “There was just a change in his schedule.”

But Gascon, who has only lived and worked in San Francisco for three years, might have benefitted from the discussion, which focused on how San Francisco has for decades pioneered a successful approach to criminal justice emphasizing rehabilitation and redemption rather than the punitive “zero tolerance” approach to crime pushed in Sacramento and other jurisdictions, which has been costly in human and fiscal terms.

“This team of individuals you see in front of you have had the most extraordinary results in leading San Francisco,” Leno said, focusing much of the discussion on how well-prepared San Francisco was for Realignment, the year-old state policy of transferring low-level offenders from the overcrowded state prison system to the local level.

David Onek, the UC Berkeley criminal justice professor who ran against Gascon for DA last year, was added to the panel after Gascon bailed out. He said, “San Francisco by all accounts is way ahead of the curve and can really provide leadership to the rest of the state for how to do Realignment right.”

The main reason for that, as most panelists acknowledged, was because of a variety of programs created by longtime Sheriff Michael Hennessey, who endorsed Mirkarimi to continue his legacy over two traditional law enforcement challengers. Mirkarimi noted that Hennessey didn’t have a law enforcement background when he became sheriff, and that the SFPD and other local agencies long resisted the progressive reforms that he instituted.

“The constellation of what we’re all addressing is unique to San Francisco,” Mirkarimi said, describing the city’s current multi-agency approach as “one that recognizes where redemption comes into the criminal justice system.”

Still, whose department oversees Mirkarimi’s three-year probation for his misdemeanor false imprisonment conviction, emphasized how much her department’s approach has changed in recent years, adopting “evidence-based” approach that respects  probationers, which she now calls “clients,” and addressing their needs.

“We created a plan for success instead of supervising for failure,” Still said. “We changed the culture.”

That cultural change came from the Sheriff’s Department, she said. “Sheriff Hennessey developed a litany of programs over the years, so we were well-positioned for [SB] 678,” the legislation that created Realignment. Despite all the recent talk about having “zero tolerance” for crimes like domestic violence, Hennessey’s controversial approach brought ex-offenders into key leadership positions and refused to dehumanize criminals or see them in black-and-white terms.

“In San Francisco, we kind of live in a bubble. You don’t know how crazy it is outside San Francisco,” Adachi said, noting how politicians in other jurisdictions have aggressively sought to block sentencing reforms and demonize criminals for political reasons.
“In San Francisco, we’ve been so fortunate that we’ve had progressive criminal justice policies,” Adachi said, recognizing that the last three DAs refused to bring the death penalty and Mirkarimi for six years ago creating the Reentry Council to address recidivism.

“It might seem like common sense, but it’s radical to other counties,” Mirkarimi said. “It makes me proud to be part of a criminal justice system that is looking forward.”