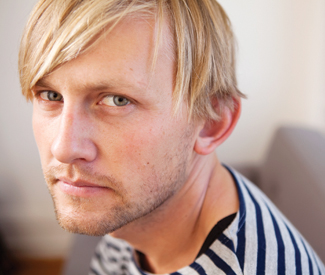 GOLDIES “It’s been a great year for me,” says Van Pierszalowski, slightly out of breath after pushing his bicycle up a seriously steep hill. “It’s been the first year that I’ve lived anywhere in a long time.”

Pierszalowski has been part of the San Francisco indie rock scene for years, first with Port O’Brien and now with WATERS, but he hasn’t actually lived in the Bay Area since his days at UC Berkeley. He’s been mostly out on the road, couch-hopping at friends’ houses upon return, spending summers fishing in Alaska with his father — or in Oslo with his European girlfriend, Marte Solbakken, who also plays in WATERS.

But in 2012, following positive reviews for 2011’s Out In The Light (TBD Records), his debut album as WATERS, he’s finally on dry ground. He’s got a somewhat permanent structure — an apartment he shares with Solbakken — on the top of Potrero Hill, and a part-time job at the bottom of those hills, at Four Barrel.

“I haven’t had a job, other than music and fishing, since college,” he says with a laugh. “Finally I’m not touring for a little while, and I’m just concentrating on writing songs, and I wanted my days to have a little more structure. So I sought out a job — I love coffee and I love Four Barrel.”

Java-brewing skills aside, Pierszlawski’s been garnering notice from music fans for other reasons: his earnest, salty sea-referencing lyrics; matured and more aggressive vocals; grungy, fuzzed out guitar-work; and seriously tripped-out music videos. As far as imagery goes, there’s a lot to take in with the video for “For the One” — flaming dream catchers, creepy convenience store clerks, acid-laced dreams, purplish starry nightscapes that look like screensavers for Windows 95, extras fleeing through smoke machine fog, and Pierszalowski riding his bicycle through a tunnel full of trash and glitter. https://www.youtube.com/watch?v=JIOJkUFTiwY

It’s kind of what WATERS is all about, the light and the dark, the weird and the weirdly confident, the grungier moments of the ’90s, soulful voyages through choppy seas, the hooks (pop and otherwise), a fisherman in a flannel.

Then there’s the more straightforward tour video for sparkly, garage-punk standout track “Back to You,” and two for moodier, yearning acoustic single “Mickey Mantle” — one clip that’s of Pierszalowski with a guitar on a rooftop, and the other a zoomed-in snapshot of his day — created for the 48-hour Music Video Race this spring. Live, the song’s a crowd-pleaser in which he pleads, “forever, forever” and gets the audience chanting the word back to him. https://www.youtube.com/watch?v=izgmACVXVBA

Pierszalowski also toured a whole lot with WATERS this year, opening for Delta Spirit across the US and Nada Surf throughout Europe. But WATERS’ biggest moment came this summer, when the band topped a bill at Brick and Mortar Music Hall.

“It was the first WATERS headlining show and I was super nervous and anxious about it. I thought no one was going to come. I could feel that my mood for the next while was dependent on how it would go,” he says. “To my great surprise, it was an amazing turnout. It was packed, and people knew the songs and were singing along and dancing. It just really felt like almost a solid year of promoting the album had paid off. And I know that’s not a huge deal, but it kind of is to me. It felt like the start of something new.”

With a boyish gleam of hope in his eyes, he adds, “Getting to play for people in San Francisco, on our own, felt infinitely more powerful than any of those [previous] experiences.”

Plus, now that he’s got his own apartment in SF, it probably didn’t take him too long to find his way home after the show.