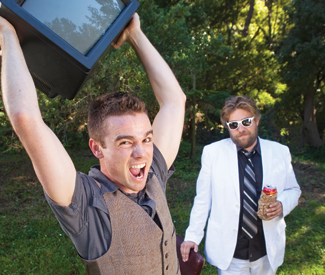 GOLDIES A PianoFight show can be almost as striking for its audience as for what the company puts onstage, even if few audiences will upstage a machine that blows ducks out of people’s butts, per Duck Lake. PianoFight crowds are conspicuously not your typical theatergoers — they’re closer to the boisterous women in office attire I noticed at the now-defunct Off-Market Theater, PianoFight’s old haunt, who had smuggled in a bottle of Chardonnay and were picnicking in a back row like it was Baker Beach. Such eager insouciance is one sign of this young company’s burgeoning success.

“We’re aiming for those people,” says Rob Ready. “We’re aiming our stuff at Giants fans. That’s who we want in the door. Our generation didn’t grow up with theatergoing as a habit.”

“On the contrary,” says Ready’s colleague, Dan Williams. “You grew up with theater as a joke, as a byline for something boring and stuffy. There’s no reason it has to be that.”

Let it be known that PianoFight is doing its part to insure it isn’t. A PianoFight show takes many forms — sketch comedy, original drama, new play festivals, oyster-fuelled theater al fresco, a rotten vegetable barrage, or the fowl comedy-horror-ballet-musical mash-up of 2012’s aforementioned Duck Lake — but it always includes a rambunctious spirit of collusion with an audience who, very often, take some part in the proceedings.

Ready and Williams, two guys whose laid-back nature belies their seriousness and savvy as theatrical entrepreneurs, first met doing theater in their Santa Barbara high school. After Ready got his arts degree at NYU, he moved out to San Francisco specifically to start a theater company with Williams, who was then working a day job downtown. In Ready’s hands was his own script for a play based on NYU’s string of student suicides called Roommate Wanted. With the help of friends and family, they produced a successful two-weekend run in 2007.

From this humble beginning, PianoFight has mushroomed into a multi-faceted, multi-armed organization that includes sketch comedy troupe Mission Control and its female-driven counterpart, Monday Night ForePlays. It regularly sells out shows, boasts a semi-official “flexible” roster of 46 company members (with many more in unofficial orbit around the company), and is building its own bar-theater complex on the site of the old Original Joe’s on Taylor Street.

Ready and Williams credit Matthew Quinn with taking a chance on their inexperienced but fervent selves when the producing artistic director of Combined Art Form Entertainment, who had co-founded Off-Market Theater in 2004, handed them the keys in 2007. PianoFight eventually left Off-Market when the rent rose, but by then it was on a roll, having proved resourceful and inspired in its own venue. When tenants Point Break Live! moved onto a bigger venue, for instance, Ready and Williams filled the gap by inventing “the nation’s largest audience-judged playwriting competition,” the (now long-lived) ShortLived series.

“So glad Point Break Live! dropped out,” muses Williams, “because ShortLived turned out to be an amazing community builder. It really was one of the biggest drivers of our company initially, since we had to get a bunch of actors, a bunch of directors, and a bunch of writers.”

“The R&D wing of the theater business is [made up of] small, scrappy companies,” says Ready. “If it was just us I’d be, ‘All right, we’re just that more awesome,’ but it’s not. There are a lot of people saying theater can be a lot of different things to a lot of different people.”

As for the name PianoFight, apparently there’s no short answer to that question. I was invited to come back some time with a bottle of whiskey and ask again. “Have at least 24 hours,” cautions Williams. “You’ve got to set aside some time, some whiskey … and bring a credit card, too.”