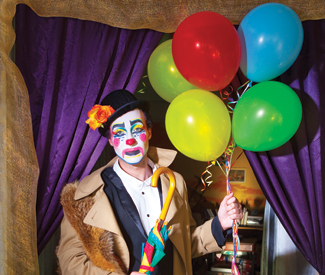 Beyond that, you never know where or how you’ll see either VivvyAnne or Sigourney. This is an artist drawn not only to the spotlight (what drag queen isn’t?) but to the genuinely experimental and demanding, whose work runs the gamut from go-go to performance art to contemporary dance (the latter most notably as an all-out ensemble member of Laura Arrington’s Wag in 2011) and in the process bridges the nightlife and performance scenes with untiring ingenuity.

This crossover élan was on display at the 2009 National Queer Arts Festival with the unveiling of Martha Martha Martha, a drag piece co-created with Eli Magid (a.k.a. Elijah Minnelli) in which some maniacally looped dialogue from Who’s Afraid of Virginia Woolf? gets refracted through a stage-full of renegade Liz Taylors. A year later, at the debut of Keith Hennessy and Julie Phelps’ “Too Much!” marathon of queer performance, VivvyAnne ForeverMORE! led an impressive roster of SF drag superstars into the proceedings (including Glamamore and Fauxnique, a.k.a. past Goldie winner Monique Jenkinson, another major influence).

That showcase brought the nightlife scene squarely into the realm of contemporary queer performance, and evolved into the sporadic Work MORE! series, based on crossover collaboration between highly distinct artists. Sigourney, who just produced its fourth installment in August, plans to tour it next year. Meanwhile, a 2012 CounterPULSE residency produced the winking hubris of MASTERWORK, marshaling a cast of po-mo drag queens under Sigourney’s control to question the egotism of the artist and the role of the audience. And in a highlight of 2012’s This Is What I Want festival, Sigourney re-purposed his performance fee to negotiate his sexual currency in real-time with his audience, while a chorus beside him voiced the testimonials of ex-lovers.

The brio and subtle play in these and other works keep Sigourney a vital presence on multiple stages, as well as an important catalyst for new work. But the more makeshift outings, without any stage at all, can be just as memorable: Sigourney in a crowded men’s room at SOMArts, for instance, seated at a table in a wife-beater beside a stack of his own poems, some pages from David Wojnarowicz, a fifth of bourbon, and a lot of shot glasses.

“It was the first time I’d brought my writing into a performance,” says Sigourney of the inebriated presentation in the john (mounted as part of SOMArts’ monthly new queer performance showcase, “The News”). “It was my writing and Wojnarowicz’s from two of his books, and the audience picked what I read.” Sigourney offered bourbon to anyone who wanted a shot with their request, and he committed himself to always drinking one with them. “I was trying to layer people on top of people. It was good for that,” recalls the artist, a little hazily. “Someone actually used the bathroom.”

Another sighting: a makeshift biergarten in Portland last September, during one of the nightly after-parties for that city’s Time-Based Art festival. Out of a small huddle by the fence rises VivvyAnne like a gibbous moon, flashlight held firmly to her face and balancing her leggy fishnets on a combination of high heels and patio furniture. After instructing the crowd in a few dance steps, she leads an impromptu off-program all her own, lip-syncing to a boom box that blasted Miley Cyrus’ “Party in the USA.”

Surprisingly, the Long Island native, a longtime theater (and later, club) kid who moved to San Francisco in 2004 and birthed VivvyAnne ForeverMORE! in 2008, says drag was something he grew up admiring but never thought he could do. Maybe that’s why he can do so much with it.

“I’ll never be a ‘lady lady’ drag queen,” he says. “It just won’t happen for me. So I started out saying fuck the illusion, what illusion? I’d wear things where my chest was exposed or a see-through dress or just underwear. There’s no illusion here to ruin in the first place. Once we agree that it is an illusion [we’re after], then we can make it together.”