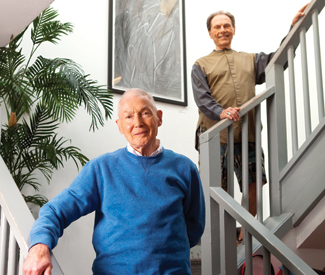 GOLDIES John Cage and Merce Cunningham, Ginger Rogers and Fred Astaire, and Fayard and Harold Nicholas are among the dance world’s most famous couples. In the Bay Area, nobody comes close to the relationship between Frank Shawl and Victor Anderson, of Berkeley’s Shawl-Anderson Dance Center.

Over the years the two men have a created a heaven for dance unlike anything that exists here, and probably could not be replicated anywhere else. Shawl and Anderson are the local dance community’s patriarchs.

They started modestly in 1958, above a liquor store on the corner of Alcatraz and College. After dance careers that spanned both coasts, they moved West from New York because they wanted to teach. Anderson had family roots in Berkeley, and the duo figured they might have a better chance at making a living in the Bay Area than in NYC’s competitive jungle.

Having performed and studied with May O’Donnell, a Martha Graham Dance Company member, they wanted to teach modern dance — at the time, a discipline that was not easily available to local dancers. They called their studio “Shawl-Anderson Modern Dance Center,” still its official name. In the beginning, Shawl remembers, “We did not even make enough money to pay its one-hundred dollar rent.”

From those early beginnings has grown the Bay Area’s oldest and — if you listen to dancers — most-beloved teaching institution, with over 100 classes per week. In addition to a full pre-professional curriculum for children, they teach modern dance; that style’s focus on individuality and personal expression has created an atmosphere that also welcomes ballet, hip-hop, jazz, and Horton, plus physical practices like Feldenkrais, pilates, and yoga.

Most remarkable is the breadth and longevity of its teaching staff, all of whom are on salary. Marina Eglevsky, whose artistic roots go back to the legendary André Eglevsky, considered the greatest ballet dancer of his generation, still teaches ballet twice a week. “Her classes are packed — people come from all over,” Shawl says. Wendy Diamond has taught modern since 1988; Joanna Harris’ decade-long Sunday morning class, “Lifelong Movement,” addresses the needs of older adults.

Younger teachers who are still actively choreographing — like Randee Paufve, Nina Haft, Antoine Hunter, and Nol Simonse — bring their own creative perspectives to the classes. The combination of life-long experiences and fresh approaches is invaluable to student dancers.

To get teachers — some start as substitutes — Shawl relies on his instincts and his experience. “I talk with them, and I can usually tell whether they would be a good fit,” he explains. “Very rarely have we had to let somebody go.”

He remembers Reginald Ray-Savage just walking in a few years ago. “I listened to what he had to say, and I just could tell that he was the real thing.” Today, Shawl-Anderson has the Savage Jazz Dance Company in residence.

But back to the earlier days: when the center was facing eviction from the liquor store (apparently, all that dancing made too much noise), student Sylvia McGraw suggested the two men look at a building across the street. “It was a home,” Shawl remembers. “I walked in and all I saw was a bunch of tiny little rooms.” McGraw pointed out that the house was zoned residential-commercial and, furthermore, that her husband was an architect.

With the budget spent on the essentials, in 1968 the school moved into the reconfigured space, with two small studios on the entry level and two huge ones — beautiful dance floors, lots of light, and high ceilings — one floor up. Shawl’s office is still the size of a closet, and the women’s dressing room still looks like it might originally have been a kitchen.

Most remarkably, the building still feels like a home. Walking up the small pathway from the street and the few steps that invite stoop-sitting, it uncannily feels like the rest of the Arts and Crafts residences that stretch toward the Berkeley hills. The wooden floors in the entry are well-worn, and the bench on the side looks like it has been there forever.

No doubt its funky charm and good usable studios have helped make what Shawl-Anderson has become. But it’s these two remarkable men who have given the place its soul. The minute you walk in, you pick up its sense of generosity of spirit, a commitment to craft and creativity, and a welcoming embrace of diversity in all its manifestations.

It’s what Paufve, whose company now is in residence, experienced when she first stepped through the door in 1986. “I don’t remember not ever having felt at home here,” she says. After moving from New York, she heard about the place the first week she was here. She also found teachers with whom she wanted to work. Over the years, she says, “People here have been incredibly generous. I honestly don’t know if I would still have Paufve Dance if it was not for Shawl-Anderson.”

Fog Beast, one of San Francisco’s newest dance companies (formed by Joe Goode dancers Melecio Estrella and Andrew Ward), recently paid tribute to “the decades of dance art cultivation at Shawl-Anderson.” Move Here, created when the duo was in residence, was a site-specific work using the building’s architectural space. It allowed the choreographers “to step into the role of host, exploring the aesthetics of hospitality, the art of friendliness and warmth.” Shawl enjoyed the performance. “They had pictures of the two of us on the walls — it was so nice,” he smiles.

Both men are now in their 80s. Anderson is semi-retired, but Shawl still takes class every day and substitute teaches when needed. Looking back over more than 50 years, is there something that they would have changed? “It is the way it was [meant] to be,” Shawl says. “I believe in the right path. We didn’t do it for the ego, we did it for love.”