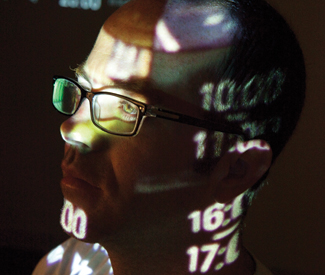 GOLDIES During my phone interview with Oakland artist Brett Amory, I kept thinking he said “emotion” when he was in fact saying “motion.”

“It’s my Southern drawl,” Amory said with a soft, apologetic chuckle. And it’s true that he retains a charming trace of his Virginia upbringing in his talk — as well as the open, forthcoming manner associated with Southern hospitality — despite the fact that he’s lived here for the better part of two decades.

But in Amory’s oil paintings, especially the epic “Waiting” series, which he began in 2001 and which has earned him several shows around the country, emotion (at least in this viewer’s case) does often sub in for actual motion. Anonymous figures, frozen in isolation or depicted as numbed-out duos or trios, are invoked with expressionistic brushwork against mostly non-descript yet formally impressive everyday urban backgrounds. Motion through time is expressed through whiteout slabs of sunlight (or, in night versions, rushes of darkness) washing over, and sometimes through, the figures, threatening to extinguish them in negative space: a snow-blind, existential embrace.

“In 2000, 2001 I was living in San Francisco, in the Tenderloin — I lived there for years. I had a job doing IT, tech support in Emeryville. So every day I would ride the bus and the BART to and from work. I’d see people waiting for their buses or trains on platforms, mostly BART. Some of them looked hungover, like I usually was. They were there, but they seemed like they weren’t. I started taking pictures. Hundreds of pictures. And at first my paintings of them were about their relationship to their environment. Putting them up front in the painting and then bringing in the negative space around them.

“But I left that series for a while, and then I came back to it six years later. My own life had gone through a lot of changes. And I started thinking more about what the people waiting were thinking about: shopping for dinner, updating their Facebook page, maybe reviewing their lives. How they were just thinking about what we all think about, but were still really disconnected from the other people around them. So painting them for me became more about that disconnect — from the landscape, from each other — that they all had in common as life and the light moved around them.”

Amory’s investigation of stillness in motion might be traced back to his aspirations toward a decidedly different career path: he trained to be a professional skateboarder and was well on his way when he was sidetracked by an injury he was too eager and young, he says, to let heal properly. Undeterred, he moved to Colorado to try his hand at pro snowboarding — until injuries again derailed his dreams. So he drew on his deep well of boarding connections and started making quality skate films.

But he wanted something more. “When I was in Colorado, I remembered this videotape I had got in the mail from the Academy of Art in San Francisco, so I asked my dad back in Virginia to send it to me. I watched it again and decided to apply. Once I got accepted though, I realized I needed a lot of help, with drawing in particular. I just wasn’t good at it. One of my teachers told me to start going to the afterschool seminars on campus for help. It was in those seminars that I met the people at the Academy who actually had a passion for art, particularly for painting, and that passion inspired me to start being obsessed with paint, to really push myself to see what I could so with it.”

The emphasis on urban stasis and washes of light in his paintings usually set off knee-jerk critical comparisons to Edward Hopper — but Amory aligns himself more with modern figurative painters like David Hockney, David Park, Elmer Bischoff, and Nathan Oliveira. “Everybody kept talking about Hopper when they first started seeing my paintings, but he was honestly off my radar,” Amory told me. “I didn’t really see anything by him in person until a few years ago.” Instead, his biggest influence is John Singer Sargent. “I can’t get enough of him. What he could conjure with just a touch of paint. My goal in life is to work towards getting at least one-tenth as good as him.”

This year, Amory showed “24 in SF” at the Sandra Lee Gallery, a series of 24 paintings with accompanying time-stamped videos that chronicled a full day of the city’s life. Each work distills in a single image an hour spent videotaping and observing the goings-on at historically and personally relevant spots like Portsmouth Square, outside Mitchell Brothers O’Farrell Theatre, or a spot in the Tenderloin where a friend was killed. “I wanted to explore how the city itself moved through time, including historical time and my own timeline,” Amory said. Exhibited with each painting was a vitrine of street detritus gathered by Amory as he videotaped each location, displaying with archeological intensity another dimension of its time-space look and feel.

“I’ve been working for years on a huge mural where I find a house in San Francisco of every color, and arrange them, dozens or even hundreds of them, in a spectrum across a wall. So I spent days walking around the city looking for the perfect houses. I kept coming back to certain spots, the spots in ’24’. So I did that series while waiting for this other, giant project to be finished.”