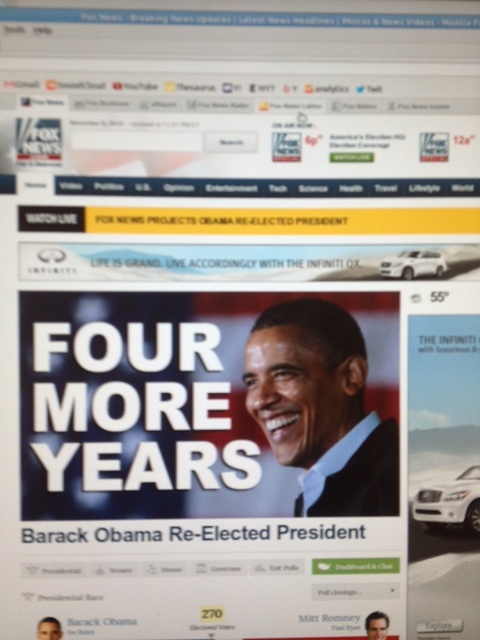 Downstairs from the rejoicing, a poster on the wall claimed that volunteers made 29,050 calls over the weekend on the Democratic incumbent’s behalf — upstairs, of course, was the payoff for all that hard work and the party.

State Sen. Mark Leno told us “San Francisco was the most productive campaign office in the state,” having hundreds of volunteers a day.

LGBT activist Gary Virginia was happy and relieved by this victory. “I feel there’s so much at stake in the LGBT community in the White House with this election.”

But there’s more to come. “I’m a little worried about the ballot measures,” SF Dem chair Mary Jung tod us.

Sup. Scott Wiener was watching the other races countrywide. “Elizabeth Warren, what an amazing voice to have in the US Senate.” he said.

DCCC member Matt Dorsey was focused on local races like D5 and D7, “I think those are going to be the most exciting races to follow.”

FOLLOW OUR FULL ELECTION COVERAGE ON OUR POLITICS BLOG