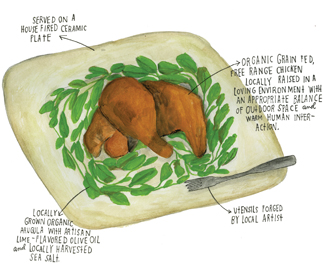 46TH ANNIVERSARY SPECIAL Of the many things I adore about San Francisco, one of them is that the word “Palestine” is not treated like Voldermort’s name, the one that dare not be uttered. You can say you are Palestinian here and no one will freak out. San Franciscans, most of them at least, will not tell you — as Newt Gringrich did — that your culture is invented, or that your identity (or your struggle) is not a valued part of the tapestry of this city.

I am not used to this. I spent the past nine years living in Washington DC, where I became accustomed to meeting Arab shop owners who dodged questions about their country of origin. Some feared a backlash from customers. Others worried about government harassment and eavesdropping. One Yemeni shopkeeper near the Pentagon even went as far as creating to-go boxes with Americans flags imprinted on them, the words “we are proud of you” under each flag. Unfortunately, it’s like this now in many cities in the US, where to be Arab, Iranian or South Asian is to abdicate your ethnic identity, to pretend it’s just not there.

That’s not exactly true in San Francisco. This city isn’t perfect and it has its own ugly past and current struggles with racial integration — but San Francisco at least tries to inculcate its motto on all who are lucky enough to live here: just be who you are. You can fly a Palestinian flag outside your business and chances are you may even attract more customers because of it. And if you show up to work wearing a red, white and blue covered hijab or turban in the city, people may very well laugh at you.

Last week I walked through the Mission district interviewing Palestinian American business owners. On Mission Street, I saw my friend Ashraf sitting on a bar stool at the café he opened two years ago. The San Francisco born Palestinian-American, whose parents were born outside of Jerusalem, wore an SF Giants baseball cap and adjusted it often during our meeting, revealing a full head of hair already graying at the age of 34.

Ashraf remembers car trips with his parents to the Samiramis Grocery just down Mission Street. Samir Khoury, a Palestinian Christian from Ramallah who came to San Francisco in 1953, opened the iconic grocery store in 1972. For the longest time it was the only place where Ashraf’s family could buy zaatar or rent Egyptian movies. It always had everything we had back home, Ashraf says.

Ashraf points out that within a small radius of his cafe, there are a now number of Palestinian owned businesses, including Philz Coffee and Bi-Rite Creamery.

“But no one really knows these are Palestinian owned businesses,” Ashraf says. “And even if they found out, no one would really care.”

I tell Ashraf about a sandwich shop I used to visit in Washington DC where the owner insisted on telling everyone that he was Jordanian. One day the owner pulled me aside and confessed he was really Palestinian from Bethlehem but told people he was Jordanian because he thought it “sounded better.”

When Ashraf hears this he laughs. “It’s not like that here,” he says. “In San Francisco you don’t have to play that act.”