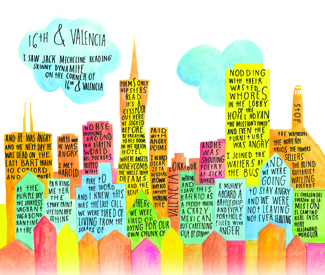 A few months before I graduated from college, a group of Distinguished Literary Figures came to my Fancy Eastern University and gave a special seminar on careers in literature. At least 150 of my classmates showed up in their $80 Frye boots and their shirts with the alligators on them and the attitudes they’d carefully honed during a life in which things pretty much went their way.

After an erudite discussion of the lofty (the philosophy of writing) and the mundane (write every day and don’t send bad photocopies of your manuscript to your publisher), one of the DLF’s asked for a show of hands: How many of you are planning a career as a writer?

Every hand in the room shot up. And I looked around and said to myself:

No, most of you people will never be writers. Because you’re too fucking happy. Because you’re all well-adjusted young men and women with real futures, who will want jobs that pay and apartments with heat and decent food and cars that start and clothes that look cool, and cappuccino that someone else makes for you, and vacations in nice places where the sun always shines.

You’ll never be writers. You don’t know enough about life.

A year or so later, I was sitting in the makeshift loft of my $175-a-month illegal storefront apartment, and my fingers were so cold that I couldn’t work the cheap and nasty typewriter very well, and there wasn’t any heat and the only way to get rid of the chill was to turn on the oven, which was a very bad idea because a banged-up British motorcycle shared the concrete floor of my room with me and the gas tank leaked, not enough to spill but enough that after five or six hours the collected aromatic hydrocarbons in the air were probably enough to ignite and consume me and half the neighborhood in a cataclysmic fireball. So: we sat in the cold.

My girlfriend had left me; her cat was gone but the place was full of fleas, and I’d picked one out of my mustache that morning when I tried to shave. I was finishing a story about antinuclear protests for a magazine that would soon fold, but maybe not before I got my $200 check, and all I could think about was:

I still have a couple cold beers, and Brian Eno on the box, the toilet hadn’t overflowed yet this week — and fuck: This is about as good as it gets.

This is how young writers live.

We don’t ask for much, writers. We don’t need better iPhones or wifi at Union Square or tax breaks. What we need, and have always needed, is chaos, misery, and grit. We need places where money doesn’t rule and where everything isn’t comfortable. We need, more than anything, a kind of cheap that isn’t cool.

You go to the Salvation Army or Goodwill these days and you don’t see many writers who have day jobs as temps in the Zone buying the crummiest suits and ties they can get away with; it’s all, like, hipster fashion.

Writers need real cheap. They need $2 beers and $4 burritos and crappy places to live that cost less than you can make selling a story or two a month. They need to exist, for real, not just for fun, in a world outside the bubble — and they need a city that makes room for that to happen.

I love where I live, but it’s failing me. And I sometimes think that nobody in charge really cares.

The Bay Guardian turns 46 this week. I’ve been part of it for more than half its life, since I sold my first story to the paper in 1982, a shocking expose about police harassing homeless people for sitting on the sidewalk. I got paid $50. It was a huge deal. I ran right out and bought a bottle of whiskey.

The Guardian was always more of a reporter’s paper than a writer’s paper — we wanted news, facts, information more than we wanted flair. And that’s as it should be in a newspaper. But we’ve also always appreciated the local literary scene, and have always been a place where young (and old) writers could find their voices and tell stories.

Now the paper’s under new ownership, and for our birthday, we contacted some of the best writers we could find in town and asked them to tell us their San Francisco story. What is the city’s literary narrative? What, to use a horrible cliché, do we talk about when we talk about San Francisco?

I’m not surprised that some of what we got was about rent — about the fact that nobody like us can live here anymore without rent control, that the housing crisis brought on by the latest tech boom has made it a terribly unfriendly city for writers.

But they also talked about beauty and passion and the reasons that, despite it all, we remain.

One day after I’d been in San Francisco a few years, my brother called me from Boulder, Colorado, where he’d enrolled as a University of Colorado student. “I can’t stand it here,” he said. “There aren’t any fucking problems.”

Yep — everyone he saw in Boulder was rich and white and clean and educated and healthy. He dropped out pretty quickly, and went back to his America, where it’s nasty and you fight for every scrap and life sucks and then you die — but along the way, you meet the greatest people in the world and you live and love and get in some awesome kicks.

Me, I stayed in my city, a place worth fighting for.

I spent my childhood and college years in New York and Connecticut; I grew up in San Francisco. This is my place in the world, and, as the late great John D. MacDonald said of Florida, “It is where I am and where I will stay, right up to the point where the Neptune Society sprinkles me into the dilute sewage off the Fun Coast.”

And for better and for worse, San Francisco is a great story, a world of love and hope and fear and greed and all these people who wake up every morning and try to make it and the world a better place, often against the greatest possible odds.

Herb Caen said it once: “Love makes this town go ’round. Love and hate, pot and booze, despair and buckets of coffee, most of it stale.” We are strange, and we are proud, and we are freaks, and while our local politicians try to tamp us down and make us normal, the rest of the world treats us as special because of who and what we are.

We are immigrants, most of us, and we all love the city we once knew, and those of us who have been here a while are the worst kind of radicals, the ones who hate change … but inside us, inside the ones who know and care and believe, there’s a heartbeat that says: We have something special here, and part of it comes from tradition, and part of it comes from the shabby underclass side of life, from the fight against greed and landlords and smart-eyed speculators who want to charge for what San Francisco once gave away free.

And that’s a kind of style and class that doesn’t fit into anyone’s portfolio of stock options.

I can talk about policy options all night. It’s a disease you get when writing becomes journalism and the fight goes out of the pen in your hand and into the pen where the decisions that change your life get made. I could tell you a thousand ways that San Francisco can stop becoming a city of the rich and too fucking cool for words and could give a little, tiny bit of its soul to the population that made it great.

I could say that the dot.com booms that ruined so much of this city’s crazy madness would never have happened without the Beats and the Summer of Love, and that we ought to honor our ancestors — even if it means the newcomers have to do what everyone else did, and live a little lower for a while.

I could make the case that housing in San Francisco ought to be treated like a public utility, dispensed by seniority, so the folks who worked for 30 years trying to build community without making a lot of cash get priority over the ones who arrived yesterday, with gobs of money and no concept of what the people who came before them did to make this city great.

But mostly I want to say this:

It’s not pretty, being a writer. The ones who succeed are few, and the ones who fail are many, and the city’s poorer for every one who is force to give up because the city would rather have rich people than people who live on the edge.

But in my San Francisco, some people still make it. I love them all. It gives me hope.