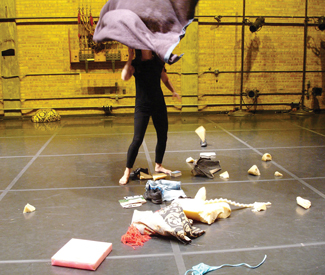 DANCE Once you have learned to ride a bike or tie your shoes, your body will recall the movements and their sequential logic for the rest of your life. It’s called muscle memory and dancers are fantastic at it.

Before videotape and dance notation, it was not uncommon to ask, say, former Martha Graham dancers about an old piece — only to hear them respond that they couldn’t recall it. But if you put them into a studio together, one of them would demonstrate a half-remembered gesture, another would place or correct it, and a third would bring up a sequence or antecedent. Four hours later, these women would have drawn out of their bodies a pretty good approximation of what had been thought to be a forgotten piece of choreography.

Morgan Thorson’s oddly titled and deeply flawed Spaceholder Festival (Oct. 5-7, ODC Theater) took a stab at examining the residue that life imprints on our bodies. Comparing the process of uncovering what is hidden to archeologists’ trying to make sense of what they unearth, Thorson partook in an actual dig and used that experience in her choreography. When it came to evaluating the results, she apparently felt that assigning artifacts to the highest bidder was an accurate reflection of reality. So the work’s middle section also included two dancers as auctioneers.

Spaceholder opened on a quasi-abstract note, evolved into a messy theatricality only to circle back on itself. Screeching machine sounds accompanied uniform dancers being spit out onto the stage as if by an assembly line. They dutifully followed each other, stepping into two against three or horizontal movement patterns. Strangest were their blank faces. They looked as if they were being pulled by something, perhaps an urge to catch what was just out of their reach.

Spreading across the stage, they moved in and out of sync with each other. Many small phrases — a scratch on a leg, a knee opening and closing, a skipping step — held promises that never were fulfilled. Some were clearly dance-derived; a fourth position and jetés, hip rolls, and toe walks were recognizable. But what to make of a wafting hand that approached like a butterfly trying to land? A woman resting on the floor on her side looked like an Odalisque, her smile an invitation to the rest of the group to join her. A finger pointing section, the result of a counting maneuver, evolved into a wheel with the arms being the spokes. Gestures might connect to each other with no apparent logic. With its neutral tone and the dance’s accompanying sense of accumulation for its own sake, it became about as involving as watching falling snow after a while. Yet simultaneously fascinating and frustrating was the clarity that these dancers brought to their tasks.

At one point, the dancers coalesced into a tight group with arms stretched up as they reached for each other’s fingers. That section later returned, except with the dancers passing pieces of foam around. One of them tried to press them into a single shape. The idea of retroactively deciphering meaning may avoid an obvious linear development, but it makes entering a piece very difficult — perhaps impossible, unless seeing it several times.

Part two opened with a promising twist. A dancer was ceremoniously carried in on a blanket and started to throw rubbish — old shoes, cans, rags, paper — around the stage as if the items were a goddess’ precious gifts. The stuff got kicked around, swept away, and finally ended up on a table, being sorted into what probably was meant to suggest legible patterns. The gathering and examination of this detritus and using some of it as props may have had its comic elements, but if so most of the humor escaped me. The remembered physicality of the table’s effect on the dancers, however, was a lovely touch.

Perhaps the evening’s most intriguing element came with Max Wirsing, the company’s lone male dancer, who donned silver sandals and paraded around while covered by a tablecloth. Later he repeated the gesture of closing the clasp around his ankle. It was clearly a movement that had entered his body. As for me, I was grateful when the last of this unearthed material — a single dancer — was blanketed by the dark falling onto the stage.