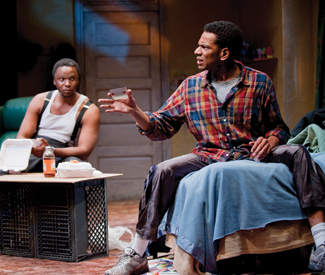 THEATER Audiences arriving at Marin Theatre Company for director Timothy Douglas’ current, beautifully staged revival of Suzan-Lori Parks’ 2001 Pulitzer Prize–winning play, Topdog/Underdog, take in a shabby, dilapidated low-rent studio apartment with its meager and seedy furnishings. But looming overhead the whole time are the red-white-and-blue bunting of some half-forgotten political rally, depending from the flies amid three long strips sheared from the stars and stripes, hung equidistantly across the stage. These thin flags have tightened their belts, and look a bit dingy too, almost sepia-toned, and floating above the impoverished scene below somehow bring to mind that flag behind Ella Watson, the African American cleaning woman in Gordon Parks’ iconic Depression-era photograph, American Gothic, Washington, D.C.

If there’s thus a certain election-year ring to Mikiko Uesugi’s careful scenic design — present before the action even starts — it’s a sonorous and dissonant one, echoing back across a political past with a strange and disorienting nostalgia, a contaminated euphoria. What could be more appropriate?

At a time when mainstream political reality seems feverishly bizarre, almost surreal, Parks’ drama endures as a shrewd poetical remix of American history, an elucidating fever dream in a realistic mode: two African American brothers respectively named Lincoln (Bowman Wright) and Booth (Biko Eisen-Martin) by a runaway father who apparently found it funny, share a precarious perch and a tainted patrimony in a poor part of a nameless city — where they act out an overlapping series of fated roles. These mix race, class, sex, family, and money as equal facets of a brutally antisocial system — a racket, in fact, high above (but qualitatively the same as) the Three-card Monte scheme at center of the story.

But in the brothers’ tragic and absurd destinies, half-grasped at best by the protagonists themselves, the play plumbs a deeper understanding too, a historical current churning and moving below everything — and in that understanding opens a sense of possibility.

The apartment is younger brother Booth’s roost, but Linc, as he’s called, is bringing home the bacon (or Chinese food) in exchange for crashing on the La-Z-Boy. Linc has been kicked out by now ex-wife Cookie (an offstage character symbolizing perhaps a kind of standard “fortune” for a married man without economic prospects, something akin to the ambiguous forecast Linc gets with his Chinese takeout: “Your luck will change”). Booth’s offstage love interest is named, with even more symbolic resonance, Grace. Early on, it’s clear she’s pretty much unattainable.

Booth wants knowledge from his brother, more than anything else. Linc was once famous on the streets as a master of the Three-card Monte hustle — which itself has nothing to do with luck — but has given up the cards in the wake of a guilt-ridden incident. Eager brother Booth (played by Eisen-Martin with a nicely coiled energy, dangerous and comically hapless at once) is dying to become a hustler himself, but his efforts to learn the ropes meet with resistance from his jaded, wary older brother (whom Wright imbues with a perfect combination of wistful compassion and alpha-male contempt).

For his part, Linc’s guilty conscience finds a kind of half-bitter contentment in his current job: impersonating his namesake at a carnival sideshow, where he daydreams as sitting duck in white-face Honest Abe drag, before a ready line of customer-assassins. Indeed, Linc’s first appearance onstage comes in the Lincoln get-up, an eerily comic site that already loads the naturalistic performances with dreamy intensity.

If Parks’ drama (which premiered off-Broadway in the summer of 2001) preceded everything from 9/11, the wars on Iraq and Afghanistan, Katrina, the financial crisis, worldwide protest movements against global capitalism and empire, and the advent of the country’s first African American president, MTC’s apt revival shows it more than keeps pace with the times as a gritty and gripping allegory of endemic, convoluted civil wars.