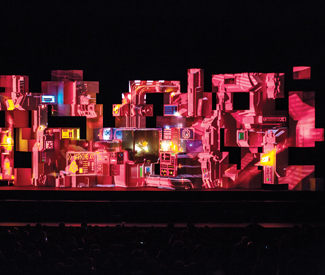 MUSIC “We’ve done the ISAM show in venues as big as the Sydney Opera House and as small as a local rock venue, but we’re basically holding our breaths every time. Someone could plug in their iPhone charger and blow the whole thing. In Coachella, the act on the field opposite had the idea of turning on floodlights for half their set, which washed us out for a good part with the ambient light.”

Brazilian electronic music legend Amon Tobin is on the phone, recounting some of the mundane worries that come with operating one of the most brilliant stage concepts in years, ISAM Live. The show is a marvel of cutting-edge technology that bathes a towering tetrominal assemblage of stacked cubes in digital projections, while — like the pilot of a Tetris spaceship, clad in his trademark baseball cap, hoodie, and jeans, ensconced in one of the glowing cubes — Tobin performs tracks from ISAM, his seventh studio album, and several other sonic treats. The tour is now in its second, completely revamped conceptual leg, ISAM Live 2.0, coming to Berkeley’s Greek Theatre on Fri/5. Tobin promises that ISAM 2.0 is “totally different … not connected to the album as much at all” from the first version, which played at the Warfield last year. Perhaps he’ll be wearing a spacesuit this time, too:

The visual illusions conjured up by Tobin and collaborators and mapped on the sculpture, made real with the help of a crack team of production designers headed up by Alex Lazarus of local art-tech collective Blasthaus, recall everything from early 20th century Constructivist art and colorform animation to tomorrow’s Xbox 360 game. Some of the effects are absolutely lovely, as when the structure “shatters” to crystalline pieces or a flood of winged creatures take flight across the stage. Some are vertigo-inducing, as when the whole thing acts as a flight simulator, or a slightly different version of the structure is projected onto the structure itself, and then begins revolving: meta! It’s all a sort of hyperreal 3-D, as shapeshifting as Tobin’s ever-elegant and booming compositions. (The music on ISAM itself is typical technopoetic Tobin — what makes the album standout is really how much the rest of the music world has caught up to his signature style, which contains elements of moody ambient, classic drum and bass, squonky electro, and crunchy dubstep without ever falling wholly into any of those genres.)

“What drove me to this idea was trying to find my way around the universal problem of presenting electronic music,” Tobin told me. “How do I make an engaging experience out of an album when I’m really just pushing buttons and twisting dials — it’s what we all do as electronic musicians. I don’t make dance music — I don’t think I even can — so the challenge becomes the concert presentation. And then the unusual situation becomes how to integrate myself into the proceedings. I didn’t just want to go out there and hang about.”

The waving hands and bobbing heads at the Warfield last year may prove that “I don’t make dance music” remark incorrect, but the show certainly succeeds at bridging the rapt audience vs. some arty dude’s knob-twisting divide. Tobin’s projects have lately been as much about technological expression as producing music — although one could argue, especially in his case, that these are one and the same at this point in history. Previous album Foley Room was a mosaic of found sounds recorded on the street (“from neighbours singing in the bath to ants eating grass”), that was accompanied by a gorgeous interactive website called “Field Recording” that featured morphological subaquatic creatures and a night-goggle feel.

This time around, Tobin’s technological adventurousness is helping to pique new interests. The crowd at the Warfield was not composed of the typical intelligent dance music, underground glitch, and scruffy turntablism fans I know from previous Amon Tobin shows. Rather, the “oohs,” “aahs,” and “this is fucking amazings” were coming from what looked to be a distinctly tech crowd. With Industrial Light and Magic, Pixar, and countless other digital animation studios located in the Bay Area, is ISAM Live introducing a new wave on enthusiasts to somewhat challenging electronic music through geek-candy visual technology?

“Well, electronic music is inherently tech-y to begin with,” Tobin says, “but even when I was just starting out, I was never interested in scenes. I’m too wrapped up in what I’m trying to do. I’m just hoping people will be into it, no matter who they are or how they got there.”

Tobin’s known for being laidback almost to the point of reclusivity, and his recent relocation to the Bay Area — “I live a little north of San Francisco, in the middle of the woods: I can walk around or go for a drive and do what I like” — has helped contribute to to both his secluded genius image and access to tech opportunity. Once he had the inspiration for ISAM Live, it wasn’t like he put an ad out on Craisglist to find designers, he told me. But a serendipitous encounter with Lazarus and the ease of putting together an adventurous, California-based design team got things going pretty easily. It’s also helped him firm up connections with local musicians he admires like SF’s Kronos Quartet, who were featured on Foley Room and will open for his concert at the Greek, and incredible live-sample collagist Eskmo, who opened for him early in the ISAM tour.

But the mind of Amon Tobin is ever-restless, and ISAM has been around for more than as year — despite the 2.0 relaunch, our conversation perks up when we begin to talk about his new release as Two Fingers called Stunt Rhythms, a beats and bass album that also belies his claim not to make dance music.

“Stunt Rhythms is a tribute to the amazing electro and breakdance music that actually saved me, growing up in a shitty town called Hastings in England. Things like Cybotron’s ‘Clear’ or Man Parrish, JVC Force’s ‘Strong Island.’ My relationship to that sound is so deep. It’s music that keeps me pushing for something further off, pushing me through drum and bass, and making my own persona.

“It’s working my way toward that thing just over the horizon that keeps me going.”

with Kronos Quartet and Holy Other