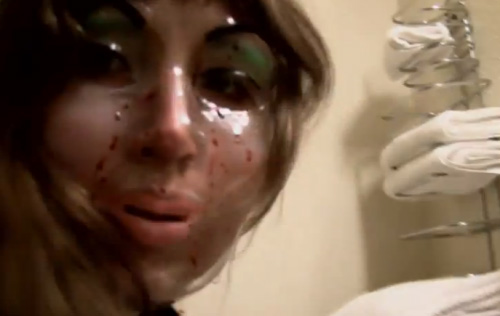 FILM In the summer of 1999, horror fans hungered for something, anything, that wasn’t a Scream-inspired self-aware slasher.

Though it had no stars, a microscopic budget, and was filmed in nausea-inducing shaky-cam, The Blair Witch Project burst into cinemas with a novel set-up — filmmakers lost in the woods record supernatural goings-on before falling victim to evil themselves — and scares galore. Towering box-office receipts, a Time magazine cover, and legions of rip-offs ensued.

“We just wanted to scare people,” Blair Witch co-director Daniel Myrick told me when I interviewed him for the Guardian back in 1999. He couldn’t have known that Blair Witch‘s influence would still be felt over a decade later, in movies like the blockbuster Paranormal Activity series — and even outside the horror genre, where stories constructed from characters filming themselves have become commonplace.

Now there’s V/H/S, an energetically exploitative take on the trend that reaches past Blair Witch to high-five the granddaddy of them all, 1980’s legendarily nasty Cannibal Holocaust. V/H/S also nods to vintage horror’s fondness for the anthology format, setting up the action with a frame story, Tape 56: hooligans film themselves behaving badly, then prowl a house in search of a mysterious VHS tape.

Each “tape” is directed by a different filmmaker or filmmaking team, all of whom were directed to use the found-footage format. So yes, V/H/S is a movie about people filming themselves watching other people who are also filming themselves.

“With a found-footage anthology, you could make a found-footage movie about people finding footage, and that seemed like such an obvious idea,” explains Simon Barrett, who worked on both the wraparound and haunted-apartment tale The Sick Thing That Happened to Emily When She Was Younger. “A lot of found-footage [features] become ludicrous; after two hours, you run into all the clichés of characters screaming at each other to turn the camera off. But you can believe that someone would leave the camera on for, say, 14 minutes of something scary happening to them.”

Adds Adam Wingard, whose multiple V/H/S credits include directing Tape 56, “Found footage is the most modern, new way to tell stories that we’ve seen before. We’ve seen vampires and ghosts. It puts it in a whole new context and framework for modern audiences — it basically spices up the genre.”

The biggest name on V/H/S‘s roster is probably Ti West, who made cult hit The House of the Devil (2009) and last year’s The Innkeepers.

“Some of my favorite movies are documentaries, so documentary-style filmmaking isn’t something that I have a problem with,” West says. “It’s that mostly [these kinds of films are] really derivative of the ones that came before them, which is frustrating.”

West, whose V/H/S segment is styled like a vacation video, prefers to shoot his films traditionally, though “I don’t think found footage is going to go away,” he says. “All of us in our daily lives [consume] found footage. We’re so accustomed to recording videos like it’s no big deal, and seeing videos recorded by amateurs. We’re so conditioned by the news and reality TV. It’s now just part of us, and part of our media.”

He’s right, of course. And when the found-footage aspect is no longer the film’s biggest novelty, like it was in the Blair Witch era, there’s room for other themes to emerge. V/H/S is — to use a word that doesn’t exist — “bro-y.” There are multiple scenes of male characters pointing the camera at clothed women, naked women, naked women who don’t know they’re being filmed, women the men are trying to have sex with, etc. (All of the filmmakers were male, though some female producers did work behind the scenes.)

V/H/S played multiple festivals, including Sundance, ahead of its theatrical debut this week. “I’m very curious about how mainstream audiences are going to respond,” Barrett says. “I feel like in the festival world, audiences come at these films ready to find some kind of political subtext to them, which I think our film overall kind of lacks at times. And when they’re trying to find out what it might be, that’s when segments get accused of being misogynistic.

He adds, “I think it’s an instinctive reaction to a horror film that touches on these subjects but doesn’t stop to tell the audience that these things are wrong, which — by the way, I think that actually is sexist, feeling you have to stop and tell the audience that women are empowered. That’s actually pretty condescending. I would rather just make a movie that does those things and hope that people get it. Which, you know, happens about half the time.”

The theme of voyeurism that runs through the film was a coincidence, though Barrett thinks that once the other filmmakers saw the frame story — inspired, he says, by Romain-Gavra’s “Stress” video for the band Justice, Harmony Korine’s 2009 Trash Humpers, and “sharking” videos — they might have been inspired in that direction.

“It is interesting that four of the six shorts could be interpreted as having some kind of failed sex tape element to them,” he says. “But I think that also just kind of organically came up, because we realized that we had total creative freedom to address the things that most found footage movies normally have to avoid. I think this was an opportunity for us to touch on these serious subjects in a goofy way. Ultimately, we just wanted to make a fun horror movie.”

West, who had a tight window to make Second Honeymoon, was the first to finish his short, turning it in before Tape 56 was completed.

“[V/H/S] turned out to have this really intense, misogynistic theme that kind of just came out of nowhere. It wasn’t planned,” he says. “Since I was first, I wonder: if I had gone last, would I have made something different? It sounds really stupid to say we didn’t know [the theme] was going on, but really everyone was very removed from each other.”

Also, West points out, “The filmmakers are not like the people they depict. In a way, the movie is presenting these awful dudes and they’re getting their comeuppance. So it may seem misogynistic, but actually it’s kind of this feminist revenge thing. I don’t know why it happened. I didn’t realize it until Sundance, when I was watching it and going, ‘There are some weird threads going on in this movie.'”