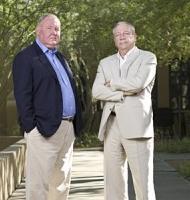 We all knew something like this was coming. Village Voice Media, owner of SF Weekly and 12 other alternative papers, has been looking for a way out of a seemingly intractable bind for some time now.

See, the sex ads the VVM sells on its Backpage web site have created a huge stir. After NY Times columnist Nicholas Kristof started a moral crusade to rid the world of the demonic prostitution ads, a lot of national and local advertisers decided they didn’t want to be affiliated with VVM, so they pulled millions of dollars worth of print advertising. Then Goldman Sachs dumped its ownership stake. And since some of the VVM papers were already doing poorly, the cascade of bad news was a real threat to the chain’s bottom line — and possibly its future. VVM was already underwater on its bank loans, and the Bank of Montreal had in effect foreclosed and taken control of the company’s finances.

Oh, but there’s nothing that could be done about Backpage, since (according to Reuters) it pulls in about $3 million a month in sex-ad revenue. That money was paying the bankers off and keeping the whole operation afloat.

It doesn’t take a rocket scientist to figure out what Mike Lacey and Jim Larkin have been thinking about: If Backpage were just conveniently put into a separate company, then everyone would have plausible deniability. So suddenly Village Voice Media becomes Voice Media Holdings, under new management — that is, the same management that’s always been there, except for Lacey and Larkin, who now own Backpage. The headlines blare: SF Weekly has been sold! No more evil Backpage! Come on back, noble advertisers!

But let’s remember: Lacey and Larkin are Village Voice Media. They built the company and hand-picked the senior management. I know how hard it is for an owner to give up his newspaper; these guys are control freaks and there’s no way they were walking away totally from VVM.

Scott Tobias, the new CEO, isn’t responding to my messages. Neither is Lacey. But let’s take a look at the essential element here: How did Tobias and his team come up with the cash to buy VVM — which isn’t worth what it was five years ago, but is still a significant media property? How did they actually “buy” it when the Bank of Montreal owns most of VVM and would want to be paid back some $70 million in outstanding loans? How would they find private financing for a company that couldn’t pay its bills without the Backpage revenue that will suddenly be going away?

Tobias told Reuters that “some private investors” were found, and maybe so, but I bet it’s this simple: The deal was financed with the Bank of Lacey and the Larkin National Trust. Those two almost certainly still hold the note on the company, and thus are still in a way the owners, and will probably still play a management role — if only because their money (and whatever deal they wheedled out of the Bank of Montreal) is still in the game.

So yes, you can say that SF Weekly and its brother and sister papers have been “sold.” But unless Nick Kristof and the advertisers who cut off the dollars are pretty damn dumb, they’ll take a hard look at this and say: Really?