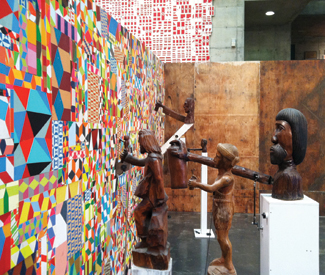 STREET ART Gone are the days when Barry McGee, or Twist, or Ray Fong, or whatever alias he happened to be painting under at the time, stalked the San Francisco streets throwing up 3-D screws, Clarion Alley stunners, and his much-admired tags. Nowadays, he exhibits in big-deal gallery shows, like his mid-career retrospective that opened to much fanfare at the Berkeley Art Museum and Pacific Film Archive on August 24.

BAM/PFA devoted a space the size of a downtown parking garage to McGee’s works, which have ballooned in size as the years go on. Walls literally bulge with clusters of photos and drawings, a homage to the multifarious chorus of the street. A four-pack of dummies from his show at Pittsburgh’s 55th Carnegie International perch on each other shoulders, the uppermost’s arm mechanically waving a spray can. Look, an upended white van! Curator Lawrence Rinder had “no idea” how McGee and his henchmen managed to fit the vehicle into the gallery, as Rinder told a passel of press types at a media preview.

Recently-completed behemoth wall of his patched acid tests in Brooklyn notwithstanding, McGee is the poster child for decades-old genre of “street artist” — those who may have gotten started on the street, but now focus their creative oeuvre on recreating street art-style works indoors.

You’ll never miss the graffiti cultural reference at the retrospective — outside BAM/PFA, tags covered one wall of the museum (“SNITCH” the faker said, tricking me for a moment into thinking that someone had beef with McGee, which would be heresy in these parts) and its glass front doors.

This juxtaposition may be the main thing that keeps McGee’s art interesting. Small tropes impregnate the Berkeley retrospective: on one red wall McGee’s buffed his own work, then overlaid it with blank speech bubbles. Creation, censure, empty creation — it’s the weird feedback loop of his gallery-street life encapsulated.

“I appreciates his early stuff more than the esoteric stuff he’s doing today,” says muralist Sirron Norris when I call him at his Valencia Street studio to talk about McGee’s influence. “That stuff just goes right over my head.”

Norris moved to SF in 1997. Initially a commercial artist, “I was just blown away by the fact that there were cartoons in museums and galleries, and that was because of Barry,” he said. “I thought, I can do that.” McGee and his partner Margaret Kilgallen were instrumental in Norris’ decision to paint his now-signature blue bears and Victorion anti-gentrification Transformer on walls in the Mission and Western Addition. (Catch his most recent, whimsical mega-wall, info in this week’s rundown of our favorite Bay Area murals)

“He was doing something different.” Susan Cervantes co-founded Precita Eyes Mural Arts in 1977, and since then has been at the nexus of community mural-making in San Francisco and the Mission. The kind of murals that Precita Eyes sponsors tend to more neighborhood, family-based than McGee’s works, which even then smacked of high art potential (or were they high art already? A graduate of the SF Art Institute, the “street artist cum gallery artist” cliché was never apt in describing McGee.) Cervantes has known him since before he got into street art, and once he started on her neighborhood’s walls, she says his influence on other artists was undeniable.

“He showed us another way of seeing the world around us,” she tells me in a phone interview. “There’s things that have more content in them than just doing your name, or doing different styles of lettering.”

Looking around at the murals in the Bay today, the possibilities McGee exposed us to are evident. But I wonder sometimes who is becoming inspired by his gallery works, or those of other “street artists” who have found a way to support themselves in the art world. Are there baby taggers out there who are having their minds blown by this street-gallery mashup, who see possibilities for the once-and-sometimes-subversive art, not just increased the potential commercial viability?

Well anyway, I sure hope so.