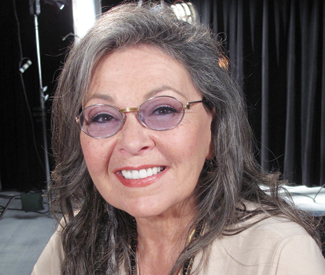 HERBWISE A world in which everyone waits with bated breath for you to turn the bitch on must be an odd one to live in. But such is — presidential candidate — Roseanne Barr’s world, so I am equal parts thrilled and terrified when she reprimands me for going off subject with a question about how she takes her cannabis.

It does not seem quite so off topic to your starstruck, trying-to-hold-shit-together columnist, however. Everyone’s favorite working class feminist sassmouth is running for the highest office in the land (after losing the Green Party nomination to Jill Stein, she is now on the Peace and Freedom ticket with Iraq War momtivist Cindy Sheehan), and Barr has made no bones about the fact that what’s happening with weed is a pre-eminent part of her campaign.

(She does answer the question, though: the marijuana card-carrying superstar says she rubs cannabis lotion on her joints for arthritis and consumes edibles to treat her glaucoma. She told Letterman that she uses weed for her “mental illness.” That guy gets all the good lines.)

“One in eight of the people in our prisons are there for marijuana,” she tells me as I try of think of a way to convince her to be my date to the upcoming drag re-enactment of her epic 1990s sitcom. “So when people think that [ending cannabis Prohibition] is a big joke and that it’s not relevant, they really ought to take a look at how [the government has] used marijuana to get their big boot on everybody’s neck.”

No one will dispute that Barr offers something different as a third-party presidential candidate. Amid the polished speeches and mind-numbing say-nothingness of 2012, hers is the lone voice asserting that yes, Paul Ryan “feasts on the blood of children” and that “anyone who eats Shit Fil-A deserves to get the cancer that is sure to come from eating antibiotic-filled tortured chickens 4Christ,” (sic) as went two of her Twitter missives that have recently inspired commentary from those who surely, never captained a top-five sitcom for six years.

Should these 140-character call-outs sound extreme to you, consider this: smoke more marijuana. “I have to say,” Barr muses, breaking from telling me how she decided to challenge Obama for the White House. “It might be my medical marijuana that allows me to go that deeply away from engrained mind control programming so that I can actually look at solutions. It does get people questioning reality, and I think this is a time when we all need to do that.”

In closing, I ask her the same thing I ask pretty much everyone I interview for Herbwise: why does she think the federal government spent the last year cracking down on state-legal cannabis dispensaries and farmers in California and elsewhere? Everyone always says “I don’t know.”

Not this babe, though. “It’s just to lock people up,” Barr tells me. “They’re arresting people and putting them in prison to make paint, because let me tell you this: 90 percent of the house paint sold in America is made by prison labor.”