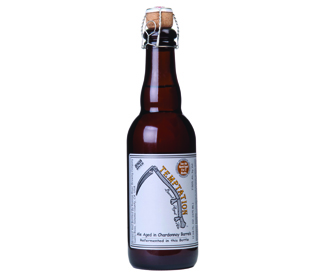 BEER Over the past 30 years, California microbrew has conquered niche markets and infiltrated the mainstream. Arguably, no individual is more responsible for this spirit of innovation than Vinnie Cilurzo of Russian River Brewing Company, based in Santa Rosa.

Possessing a cult following with Trekkie-like fervor for his generously hoppy beers, Cilurzo is credited with inventing the double IPA early in his career; and Russian River’s elusive, seasonally-released Pliny the Younger was recently determined by BeerAdovocate.com to be the best beer in the world.

But his maverick side is perhaps best reflected in his sour ales: a highly specialized range of Belgian-derived brews, revered in beer-geek circles for their complexity. Aged in wine barrels for years at a time, with the addition of fruit like sour cherries and currants, and often subjected to the risky practice of spontaneous fermentation, sours are as temperamental as they are inefficient in respect to time, cost-effectiveness, and space preservation. Often called “wild ales,” these beers require a knowledgeable, experienced brewer to tame them.

I spoke with Cilurzo over the phone recently about his approach to the lip-smacking sour. Beer lovers, and novices alike, read on:

SFBG: “Sour” is a pretty popular umbrella term for a whole range of beers. Do you accept that term? Reject that term? How do you classify them?

Vinnie Cilurzo: I’m fine if someone wants to call them sour, or barrel-aged, or whatever they want to call them. I think for the most part the beer connoisseurs know what they are. You know, on occasion a non-beer-enthusiast will buy a bottle and be surprised when they find it is sour in flavor. It doesn’t say it on the front of the label, but we don’t make a huge deal out of it, either way. Barrel-aged funky beers… is the term we tend to go with.

SFBG: These sours, you’ve been making them for a while. Do you feel like you’ve kind of gotten the variables down, and know how to control it, pretty much every step of the way?

VC: We have a good handle on it, but the beer is always in control. The time when you start feeling that you know what you’re doing, the yeast and the bacteria will throw a curveball at you, that’s for sure. So, the beer really does tell you when it’s ready. It’s weather-dependent; it’s temperature-dependent; it’s seasonally-dependent; it’s what was in the barrel before; it’s how long you clean the barrel. For the spontaneous beers, specifically, it’s how long we leave the wort in the koelship, which is the open fermenter. There’s so many variables. So, you have to be very, very pliable, and be able to go with the flow, if you will.

SFBG: Is there a glass that you feel that your sours are particularly well served in?

VC: If you’re at home drinking Belgians or sour, barrel-aged beers, I’d say: try a pint glass with half the beer and put the other half in a wine glass, if you don’t have a stemmed, beer-type glass, and see if you can tell the difference. I think you can tell a big difference, particularly in aroma, and obviously some flavor, as well, by using a non-pint glass.