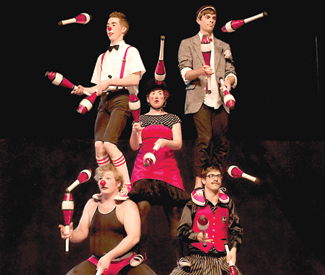 
THEATER Aficionados of the San Francisco Fringe Festival, now in its 21st year, know that sorting out the clowns, puppets, relationships, rock operas, and foreskin on display or under consideration across 12 days and roughly 40 shows can be a real crapshoot. But that’s the deal — and at least part of the appeal — with a curator-free, lottery-based program in which anybody with an act and the luck of the draw can set up shop for an hour on one of the handful of stages in operation at the Exit Theatre complex and participating venues.


Invariably ranging widely across (to borrow a title from this year’s lineup) "the good, the bad, and the stupid," the whole usually proves greater than the sum of the parts, private or otherwise. There’s just no event quite like the Fringe. And a really good show can make up for a lot of boredom and horrified silence.


Take, for instance, that title just borrowed above: the Pi Clowns’ latest show may not be perfect in every respect, but you can’t help respecting their perfect portrayal of our general fallibility. The Bay Area–based six-clown physical comedy troupe wowed in 2008 at their Fringe debut (After-Party), and they wow again in The Good, the Bad, and the Stupid, with expert chops, serious smarts, and an undiminished instinct for the ridiculous. Highlights of said lowlights include a horse race on broomstick stallions, a feast of acrobatic juggling, and another delicious slo-mo melee. (Meanwhile, on the significantly darker end of the clown spectrum, there’s Naked Empire Bouffon Company, raucous devotees of the grotesque, whose You Killed Hamlet, or Guilty Creatures Sitting at a Play was not caught in time for review but remains on the must-see list.)


Moving right down the alphabet from clowns, one will find several Christian-themed plays among this year’s offerings. Granted, most of these involve an ironic or satirical approach — like San Francisco–based David Caggiano’s deft and witty solo play, Jurassic Ark, which I caught in an earlier version elsewhere and which concerns an evangelical preacher Hollywood-bound with an idea for a major motion picture selling Creationism to the heathen evolution-swilling masses.


Then there’s Bible-Not: Stories for Grown Ups, which sounds like it sports a subversive edge to its advertised retellings of popular Bible stories, from Adam and Eve to Noah and the Flood. In fact, the play, written by retired journalist and clergyman Charley Lerrigo, is a lifeless resuscitation of ye old adages in a flatfooted comedic-dramatic vein, wherein, for instance, God appears to Noah as a beautiful woman in a silk gown — but still carries out the genocidal flood because she loves people. The last of the proselytizing play’s four dreary episodes (bridged by overtly thoughtful narration from a "showgirl" played by Karen Biscopink) is the second coming of Christ (Tristan Cunningham) to a San Francisco pastor named Bob (Charlie Shoemaker), who is naturally converted from disbelief to rapturous wonder in the face of the ingenuous, miracle-wielding stranger. Overall decently acted by a dutiful cast, the preachy play nevertheless reaches only the choir at best.


In the realm of puppetry, The Collector, by San Diego’s Animal Cracker Conspiracy, begins promisingly, with delicately designed maquette sets featuring a humble debt collector overseen by a tyrannical monkey-manager, simultaneous video projections and animations on a screen above, and a dreamy, clinking, wistful musical soundscape. But the wordless plot is sometimes challenging to decipher, the pace sluggish, and the action repetitive enough that, by the end, you realize it’s just a nifty installation that thought it was a play.


Meanwhile, Legacy of the Tiger Mother, by Las Vegas–based Angela Chan and Michael Manley, manages to pack a very clear, funny, and compellingly heartfelt storyline about intergenerational tensions between a Chinese American mother and daughter succinctly into a very agreeable hour — with music and witty lyrics for good measure. Chan’s semi-autobiographical musical may have formulaic elements, but they’re executed with winning skill and verve by a smart team fronted by the fine duo of Satomi Hofmann and Lynn Craig, accompanied by Chan on a piano that segues slyly between erratic keyboard exercises, controlled classical recitals, and expressive Broadway-style outbursts. (Meanwhile, on the darker and definitely weirder end of the cabaret spectrum, there’s SF’s Dan Carbone and Andrew Goldfarb in The Wounded Stag & Other Cloven-Footed Tales of Enchantment, whose archness is so arch as to be uncomfortably sincere.)


915 Cayuga’s SF Fringe Fest Extravaganza is a more promising title than show, but the radio-style variety piece, recorded as a podcast before its "live" Fringe audience, has a low-key charm despite often clunky or corny writing thanks to a fairly personable and adroit cast.


Among the more misleading titles is Aerial Allusions — at least if, like me, you picture some serious acrobatic work happening on and/or over the stage at some point. True, there’s a little able and lithesome wriggling around a ladder near the outset, but this meandering and semi-inept duet by a Canadian couple is lopsided in talent and altogether rambling. It took only a few seconds for one gentleman at the back to clear a path through some empty chairs and burst out of the theater. My date followed him a few minutes later. *