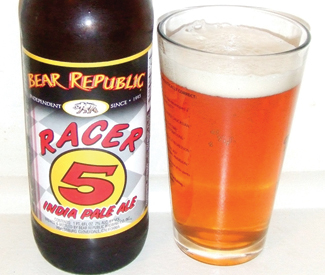 In a less confessional mood, I might just leave it at the fact that I love strong, malty, hoppy India pale ales, the nectar of the gods. That weak-tasting lagers and pilsners just don’t quite do it for me. But the truth is that I’ve begun to think of my taste for strong beer as something closer to an addiction, one that I’m increasingly powerless to resist.

It doesn’t matter what time it is — or what my intention, mood, or level of sobriety. When the bartender asks what I want, my mouth almost involuntarily forms the words “Racer 5” or “Lagunitas IPA” or some other strong beer, as if it has a mind of its own and knows what it wants. I find it difficult to argue with my own mouth.

Even at a superb beer spot like Magnolia Pub and Brewery, with its wide variety of great and tasty beers — many of which I’ll taste from time to time, just to remind myself of what I’m missing — I’ll always wish that I’d ordered one of its house-brewed Proving Ground IPAs instead, and get that on my next round. Never mind the consequences of several 7 percent alcohol beers, it’s just what I have to have.

I seek out bars like Toronado Pub and Murio’s Trophy House that carry Pliny the Elder, Russian River Brewing Company’s decadent double IPA, with its chart-topping 8 percent alcohol content. And on the special occasions when they’re privileged to carry a keg of Pliny the Younger — the rarely-released triple IPA with 10.5 percent alcohol, the malty hops oozing from each pint — I’ll be there with my fellow addicts at any hour of the day, staying until that keg is dead (which usually happens within an hour or so.)

Peer pressure may have something to do with it, because increasingly it seems as if my closest mates share and help enforce my addiction. I’ve been heckled mercilessly when I try to mix things up with a different, lighter pitcher during our long sessions at Zeitgeist, or when we’re taking advantage of the $3 happy hour pints at Dalva and I stray from ordering Green Flash or Bombay by Boat.

Addictions need reinforcement, and we all seem to be part of cultural moment when strong beer — the stronger the better, as befits our maturing constitutions — is king. It’s our birthright and our expectation. When Southern Pacific Brewing Company opened in my Mission District neighborhood last year, it surprised nobody that it brewed a strong pale ale, a stronger India pale ale, and an even stronger extra India pale ale.

As a Northern Californian in his mid-40s, I’m a child of the microbrew revolution, the first generation that rebelled against watery, mass-produced “beer,” rejecting the Coors and Budweiser cans favored by the Baby Boomers in favor of the stronger, tastier ales hatched in bottles and kegs by California craft brewers.

That’s when it began, simply enough, with beers like Anchor Steam and Sierra Nevada Pale Ale that would find themselves fermenting in ever-larger vats due to their popularity with my people.

But pretty soon, they weren’t cutting it anymore, particularly after I began to experiment with homebrewing and developed a taste for the sweet malts and hops that I mixed into my wort, spurred on by watching my yeast consume carbs and expel strength into my bubbling concoction.

Maybe there’s a cure for what ails me, or what ales my buds crave. Frankly, I’m not looking for one. I’ve embraced the fate that strength is my weakness, and I’ll drink it in by the pitcher. Cheers.