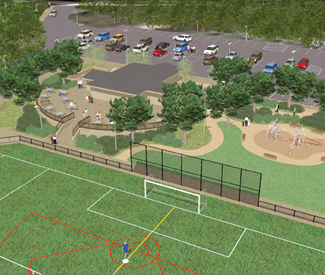 Recreation and Parks clubhouses are privatized and cut off from public access. Public spaces like the Botanical Gardens and the Arboretum in Golden Gate Park are closed to people who can’t pay the price of admission. Event fees and permit processes have become so onerous that they’ve squeezed out grassroots and free events.

It’s been enough to infuriate a long list of neighborhood groups who have been complaining about the San Francisco Recreation and Park  Department for years.

And now those complaints have led to a highly unusual coalition of individuals and groups across the political spectrum coming together to do what in progressive circles was once considered unthinkable: They’re opposing a park bond.

From environmentalists, tenant advocates, labor leaders, and Green Party members to West Side Republicans and fiscal conservatives,  activists are campaigning to try to defeat Proposition B, the Clean and Safe Neighborhood Parks Bond.

The bond would allow the city to borrow $195 million for capital projects in several parks around the city. It comes five years after the voters passed a $185 million park bond.

Environmental groups like San Francisco Tomorrow and SF Ocean Edge oppose the bond, and even the Sierra Club doesn’t support it because “In recent years, we have had many concerns with management of the city’s natural places,” as Michelle Meyers, director of the Sierra Club’s Bay Chapter, told us.

Matt Gonzalez, the only Green Party member ever to serve as Board of Supervisors president, is part of the opposition, as is progressive leader Aaron Peskin.  Joining them is retired Judge Quentin Kopp, darling of the city’s fiscal conservatives.

Many of the people opposing Prop. B have never before opposed a city bond act. “This is very difficult for me,” said labor activist Denis Mosgofian. “Some of us always support public infrastructure spending.”

When we called Phil Ginsburg, the director of Rec-Park, for comment, his office referred us to Maggie Muir, who’s running the campaign for Yes on B. She sent a statement saying: “Unfortunately, a small group of individuals are opposing Proposition B because they disapprove of Recreation and Park Department efforts to improve our parks and better serve San Francisco’s diverse communities.” The statement refers to Prop B’s opponents as “single issue activists”

So who are these activists, and why have they come together to oppose the parks bond?

Many started with, as Muir put it, a single issue.  Journalist Rasa Gustaitis  didn’t want to see fees to enter the Botanical Gardens and Arboretum in Golden Gate Park.  West of Twin Peaks resident George Wooding was upset that Rec-Park has been leasing public clubhouses to private interests. Landscape Architect Kathy Howard took issue with a plan to renovate Beach Chalet soccer fields, complete with artificial turf and stadium lighting.

After a few years of fighting these small battles, people like Gustaitis, Wooding, and Howard started to see a pattern.  Park property was being privatized.

Some city departments, like the airport and the port, are so-called enterprise agencies. They don’t receive allocations from the city’s general fund, and operate entirely on money they charge users. In the case of the airport, most of the money comes from landing fees paid by airlines. The port charges ships that dock here, and takes in rent from its real-estate holdings.

Other departments, like Recreation and Parks, provide free services, funded by taxpayer money. In theory, the department creates and maintains open spaces for public use. The recreation side offers services like classes and after-school activities, many of which are centered in recreation centers and clubhouses in parks throughout the city.

These have been staffed in the past by recreation directors, adults who coordinated and supervised play, in many cases becoming beloved community figures.

But some city officials want that mission to change. In a time of tight budgets (and facing significant cuts to its operating funds), Rec-Park has been looking for ways to increase revenue by charging fees for what was once free.

In fact, in a 2010 Rec-Park Commission meeting, interim General Manager Jared Rosenfeld said, “the sooner we become an enterprise agency, the better off we will be.”

In August 2010, the department fired 48 recreation directors.  In their place, Rec-Park hired part-time workers who were paid to put on programs but not to staff neighborhood rec centers. The department also hired six more employees in the Property Management Division, tasked with leasing out and renting parks property.

In 2010, the commission also approved a plan to impose a fee for non-residents and require residents to show ID to enter the Arboretum. The once-free public garden was on its way to becoming a cash cow (operated in part by the private San Francisco Botanical Society).

A fledgling group formed to fight the fees – and its members soon connected People from SF Ocean Edge, the Parks Alliance and SPEAK who were not pleased with a proposal to install artificial turf and floodlights at the Beach Chalet soccer field and people who opposed the leasing of clubhouses.

Mosgofian, a member of the Labor Council and worker with Graphic Communications International Union Local 4-N, helped bring together many disparate groups who, they realized, have a common goal in halting the privatization of the parks system.

One of the turning points was the fight over J.P. Murphy Clubhouse in the Sunset.

In July 2010, Rec-Park quietly began taking clubhouses, previously free and open to anyone in the neighborhood, and putting them up for lease. Nonprofits, some of them offering expensive programs,  took exclusive control of public facilities.

For Rec-Park, it was more money. For neighborhood residents, it was a sign they were being cut off from the resources their tax dollars built and funded.

“They would put a notice on the clubhouse door for a hearing, they would have four or five concerned mothers show up, and they would lease the facility,” said George Wooding, then-president of the West of Twin Peaks neighborhood group that got involved in opposing the clubhouse privatization.

The J.P. Murphy clubhouse in the inner sunset had benefitted from the 2008 bond. The building was renovated at a cost of $3.8 million. But when the shiny new rec center was finished, Rec-Park tried to put it up for lease.

Wooding helped organize strong opposition to the lease. They had already paid for the clubhouse through taxes and bond money, the opposition figured—why shouldn’t it be kept open to the public, free?

“I’d had enough. We felt, this is our park,  they just spent a ton of money. They fired the rec director. When Rec-Park came to rent out the facility, we just said no way,” Said Wooding.

The department gave up, and J.P. Murphy wasn’t leased. But without a lessee, the department simply closed the center. It’s empty and dark – although it’s available for $90 an hour rent.

Other similarly frustrating battles were going on around the city.

“This opposition is punishing the people who use the facilities across the city, children who need safe parks to play in, seniors, and those who are disabled who need ADA compliance,” said Muir.

But Friends of Ethics, another group opposing the bond, argues that Rec-Park shouldn’t get another cent until the agency cleans up its act. In a paid ballot argument against Prop B, the group brought up the controversial process of leasing out the Stowe Lake Boathouse last year. The move to put Bruce McLellan, longtime operator of the family business that sold snacks and rented paddle boats, on a month-to-month lease before auctioning a new lease to the highest bidder created a serious backlash.

On top of that, commission officials were accused of bias when they recommended a lobbyist, Alex Tourk, to one of the companies vying for the contract.

“It’s unseemly and it clouds public trust,” said No on Prop B proponent Larry Bush,  who publishes Citireport.

The boathouse isn’t the only much-beloved tradition ended under the current Rec-Park administration’s reign. The Power the Peaceful festival, which brought big name musicians and thousands of attendants, all for free, has been priced out due to dramatic increases in fees. So has the Anarchist Book Festival.

Bob Planthold, a disability rights advocate who is also a member of Friends of Ethics, says that there are issues in the ADA compliance plans for the Parks Bond as well. Planthold says that money from the last bond measure in 2008 was misspent in terms of disability access.

“Trails weren’t graded properly. There was no attention to whether there were tree roots that might be rising above the level of the trail that could trip somebody,” said Planthold. “They didn’t do a good, proper, fair job on making trails accessible.”

The bond got unanimous support from the Board of Supervisors. That’s because it earmarks money for parks that desperately need it throughout the city.

But that doesn’t mean all the supervisors are pleased with the way Rec- is being run, either. In July 2010, Sup.  David Campos and then-Sup.  Ross Mirkarimi tried to pass a Charter Amendment to split the appointments to the commission among the mayor and the supervisors.

But they couldn’t get the measure through, and the commission remains entirely composed of mayoral appointees.

So now the voters have a choice: Give more money to what  many say is a badly managed department moving toward the privatization of public property – or shoot down what almost everyone agrees is badly needed maintenance money. Of course, the critics say, Rec-Park can always change its direction then come back and try again in a year or two – but once public facilities become pay-per-use private operations, they tend to never come back.