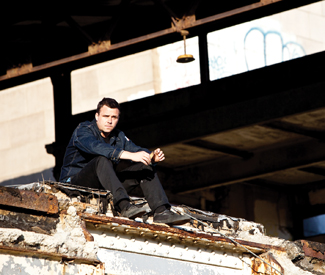 MUSIC Singer-songwriter Bryan McPherson had this nagging feeling three years ago, that he needed to leave Boston and relocate to the Bay Area. Even he didn’t understand from where this itch grew.

“I came out here to go west, just to go somewhere, go as far away as possible, for whatever reason,” McPherson explains.

He didn’t know it when he left, but the new environment would instantly fuel a whole album’s worth of new material — just as political and folk-oriented as his earlier work, but now with a new level of focus.

“I wrote ‘I See a Flag’ right when I got here. I started seeing flags everywhere. I noticed all this American shit. I got in touch with this whole American theme. Then I was in Oakland during the controversy of the Oscar Grant trial,” McPherson says.

“I See a Flag,” and the rest of the new songs would eventually become the aptly titled American Boy, American Girl, which was released on Stateline Records this spring. Like much of the album, the power of “I See a Flag” is in observation, which explores the contradictory nature of American culture. (“The police shot him down/He was laying on the ground/And now the whole damn town is going to burn to the ground/I don’t understand/But I see a flag blowing in the wind.”)

Playing political folk music is obviously reminiscent of icons like Woody Guthrie and Bob Dylan, but what distinguishes McPherson from these songwriters is how emotion-centric his music is. His words aren’t just cerebral ponderings about the state of the government. It is one man belting — at the top of his lungs — his honest, emotional impressions of the world, which in this case, just so happens to be America.

“I’m not some crazy nationalist. I just grew up in America. This record was written mostly over the course of the last couple years, being broke, just working hard, not getting by, barely making ends meet,” McPherson says. “There’s stories in there about people who are forgotten, not remembered and never were mentioned. It’s all true. It’s all me or someone I know. I’m not sitting there making shit up, wondering what it’s like in Bangladesh. I’m not imagining something. It comes from real experience.”

On the surface, the songs discuss the injustices of America and the contradictions its citizens must bear in order to have a successful, easy life. But underneath the surface, the record is about the McPherson’s alienation, both as he identifies himself as an American and is surrounded by other American’s apathy.

“Americans are so ignorant now. They have no idea what this country was founded on. They’re more concerned with updating their status and throwing a picture of a fucking cheeseburger on the internet than actually thinking they have a little bit of power,” McPherson says.

Of course, his feelings of alienation were compounded while writing these songs because of his relocation to the Bay Area from the vastly different political climate of Boston.

“It’s like being in another country. I felt self-conscious. I came out here with a thick Boston accent. The culture is different. People are way different,” McPherson says.

But being an outcast wasn’t something new to McPherson. Even in Boston, as a young musician from Dorchester, which is a working class neighborhood in Boston, McPherson would play open mic nights in Cambridge, where the art section is. He says the rich kids there immediately identified him as different.

“When I opened my mouth and started talking to people and they start to look at each other, kind of be weird because of the way I talk. I’m stupid because I have this accent. I’m poor. I’m probably dangerous. I’m not them. I definitely don’t have anything to offer. That’s the vibe that I consistently got, my first experiences dealing with the status quo, those sorts of people calling the shots,” McPherson says.

He recorded his first album, Fourteen Stories, while still in Boston in 2007. McPherson already has his third album written. He just needs to record it.

With Lera Lyn, the Lady Crooners