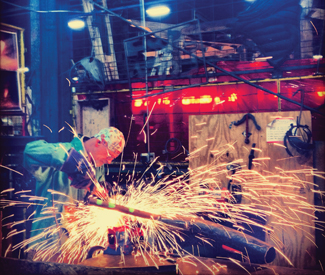 FALL ARTS Is this the last Burning Man? After 26 years of resiliently expanding on the vast canvas of Nevada’s Black Rock Desert, and reaching what is arguably the pinnacle of its popularity and artistic innovation, the answer is: Probably not.

After a Nevada judge concerned with burner morals and values recently worked with the county’s Board of Commissioners to void its agreement with BRC and place Burning Man under its new Festival Ordinance, BRC sued the county, claiming it “imposed new, unnecessary, unlawful, and potentially ruinous fees on BRC, threatening BRC’s ability to conduct Burning Man 2013 and going forward.”

The suit won’t affect this year’s event, which officially begins Aug. 26 and which was already being heavily battered by other forces, particularly Mother Nature of late. Art and setup crews on the playa, which is extra dusty after a record-dry winter, are telling horror stories of sustained 60-mph winds, day-long whiteouts, freak storms, and temperature extremes.

That could be one reason why a glut of Burning Man tickets went on the market in recent weeks, with many desperate sellers accepting less than face value and knocking the bottom out of the market for any ticket scalpers still hoping to cash in on record early demand for Burning Man tickets.

BRC started the year under a torrent of criticism for a new ticket lottery system that left most veterans without them. The organization gradually took several countermeasures, including canceling a secondary ticket sale and selling those 10,000 tickets directly through established camps and collectives, organizing an aftermarket ticket exchange and taking anti-scalper actions, successfully petitioning the Bureau of Land Management to increase the population cap to 60,900 (last year, the event peaked at below 54,000), and releasing a few thousand extra tickets at the very end. And that big year unfolded against the nearly forgotten backdrop of BRC’s internal work developing the new nonprofit Burning Man Project to take over the event from the LLC in a few years.

Each action prompted its own backlash — from both burners and anti-burners concerned about the skyrocketing population to myriad complaints about BRC policies and direction — and set of warnings of impending doom.

When I asked event founder Larry Harvey on the phone about this crazy year, he agreed, “It’s been full of alarm and incident.”

The incident that most alarms Harvey now is the sudden turn that Pershing County has taken, tripling this year’s Burning Man fees to $450,000 and potentially jacking them above $1 million in coming years, reportedly to fund more policing of risqué behaviors that Judge Richard Wagner has publicly objected to.

BRC’s lawsuit claims the judge and county officials used “a collusive state lawsuit as to which BRC was not a party” to regulate the event “not out of a neutral and objective concern for public safety issues, but because of their opposition to what they consider to be the content and culture of Burning Man, in violation of the First Amendment.”

“We’re doing this because we felt we had no recourse,” Harvey told me, although he expressed far less concern about other perceived existential threats to Burning Man. “I would like to take some modest credit for solving the scalper problem,” Harvey said. He claimed validation in the current easy availability of tickets at face value and minimized the role of departing veterans, discouraged visitors from afar, and those scared by dust storm stories.

“Last year was remarkably good weather, and it was unlikely we would see that again,” Harvey said fatalistically. But Burning Man is meant to be difficult and unpredictable. After all, he said, “We’re talking about chaos here.”

Guardian City Editor Steven T. Jones is the author of The Tribes of Burning Man: How an Experimental City in the Desert is Shaping the New American Counterculture.