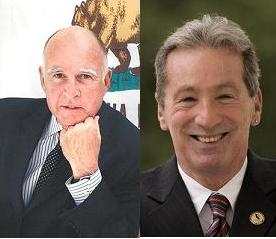 A few good bills have emerged from the madness of the end of the Legislative session in Sacramento — including measures by Assemblymember Tom Ammiano and Sen. Leland Yee — and now we have to wait for the governor, who isn’t thinking much beyond Prop. 30.

Jerry’s always odd and unpredictable, but this year, I’m told, he’s focused almost entirely on getting his tax measure approved. He’s told everyone in the state how much everything will suck if we don’t vote Yes, and he’s made it something of a referendum on his leadership. If it goes down, he’s facing almost unthinkable cuts to education and public services — cuts that will make him hugely unpopular. When class sizes go up and UC rejects qualified students and cops get laid off, the voters won’t blame themselves for rejecting Prop. 30; they’ll blame the guv. And Jerry knows it.

So he’s gone all in on this one — and he’s viewing everything he does, including every bill he might sign, through that lens.

Which leaves some very worth legislation up in the air — or rather, since it’s Jerry Brown, up in the ozone.

Ammiano managed to win approval for a measure that would allow the news media to interview inmates in state prisons — something that the California Department of Corrections and Rehabilitation has blocked since 1996. Right now, the only way reporters get access to the inside of prisons is on special tours that CDCR sets up — and the jailers get to decide which “random” inmates can talk to the press. It’s pretty basic — In San Francisco, the Sheriff’s Department allows reporters to talk to any prisoner who consents to an interview, and nothing bad has happened. We spend so many billions of dollars on prisons, and we know so little about where it goes. Even the prison guard’s union (Jerry’s BFFs) supports this. Jerry? Who knows.

Another Ammiano bill, AB 889, would require that domestic workers (people who do child care, housecleaning etc.) get basic labor rights, including lunch breaks and overtime. Seems like a no-brainer (and no, it doesn’t apply to your casual high-school babysitter). Lots of support, and it’s hard to see what this has to do with tax policy, but nobody’s sure about the guv.

And everyone’s really unsure what will happen with Sen. Leland Yee’s latest attempt to give juveniles who are sentenced to life without parole at least some opportunity to get out of prison before they die. SB 9 is pretty moderate — it states that a person convicted of a crime as a youth who has already served 15 (FIFTEEN) years can petition a court to reduce the sentence to 25 (TWENTY FIVE) years. Nobody’s getting out without serving some long, hard time, but since someone who is an accessory to murder at 15 almost certainly doesn’t have the brain development of an adult, and no other industrialized nation in the world allows LWOP for anyone under 18, and since there are only 300 people in the who state prison system who would be eligible for sentence changes under this law, I can’t imagine anyone opposing it. Seriously, Jerry. Can you veto something like this? The Jesuits would go batty.