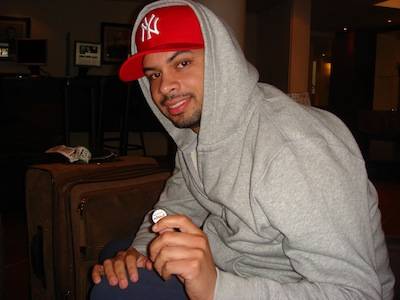 Eighty-year-olds like myself keep finding new Wonders of the Internet: despite basically living at record stores in Detroit in the early 1990s (props to Buy-Rite, Record Time, and Sam’s Jams) and working my way through college throwing raves, it is only through YouTubes, Discogs, and the recent resurgence of old-school dance music DJs and producers that we fully comprehend the breadth and scope of some of the major techno and house players. Case in point: Detroit’s MK, aka Marc Kinchen, who’s appearing this weekend on the roof of the W Hotel as part of As You like It’s second anniversary.

MK appeared here last year with his brother Scottie Deep, and they dug up some amazing, harder house sounds of the late 1990s on the Public Works dance floor. But it’s MK’s wizard early ’90s house dubs that have rightly enshrined him, along with Masters at Work, as the underground winner of that era. In the age before the Internet, when the only way to hear this music was on the dancefloor, you needed a clear and unique style to “brand” yourself instantly on listeners, and MK’s was one of the most recognizable. You just knew a new MK joint once it dropped — but only now, 20 years later, have I discovered just how many tunes of his I missed simply because I showed up at the club or the record store on the wrong day.

I heard MK kill it with a mix of all his own records at Movement: the Detroit Electronic Music festival this year, and afterwards at the KMS label’s 25th anniversary show (in the booth with Stacey Pullen, Kenny Larkin, and Terrance Parker — dreamy!!) he’ll likely bring that same warm intensity and catchy sensibility to the awesome-looking As You Like It party (don’t worry, despite the W location it won’t be douchy at all — the last one was quite wonderful with a great crowd). I wanted to share some of the memories I have of various MK joints below, in the context of growing up a gay Arab house-loving boy in Detroit and encountering his works one by one of some amazing dance floors.

I fell in love, broke up, fell back in love, broke up, got back together, and then spent a couple melancholy years alone to this track. Thing is — I couldn’t find it anywhere on vinyl. So basically I would sing myself to sleep with it, laugh and cry to it in the back of my head, and pester my poor DJ friends like D. Wynn and Butch to death to play it. And when they would I would explode with feeling. When I finally got my hands on the MK + Alana album (on cassette), which was lovely but definitely a play for mainstream respectability, thus the more slowed-down R&B tempos, I wore that shit out on my Walkman. When MK dropped this at the DEMF this year, there wasn’t a dry eye in the house.

Props for the silent Trollope pun and the absolutely brilliant lyrics, especially for a bookish queer boy obsessed with all things British (if anyone else has so skillfully deployed the phrase “cricket pavillion” in a dance song, I know not who.) But MK’s mix of the pet Shop Boys b-side is what propels this tune into my top 10 songs of all time. It’s a dub masterpiece of propulsive rhythms and surrealistic touches — and possibly one of the greatest mixes of all time.

One of the theme songs of what I would call Detroit’s greatest club, DJ Ken Collier’s Heaven, an all-night gay club (“black gay club” in the homo-segregationist language of the time) out near Six Mile and Woodward, “Burning” revealed how very poor the Madonna pablum of the “white” gay clubs was at the time, and also introduced a new generation to house music. (By then enough kids had come through the rave scene without hearing proper house music to constitute a mini-epidemic.) This mix probably introduced the same crowd to dimished 7th chord structures as well. When I ran into MK outside the KMS 25th anniversary party at St Andrew’s Hall this past May, legendary radio DJ Alan Oldham dropped “Burning” from the third floor — MK cocked his ear as he posed for a photo and said, “I smell something burning.” What a kidder!

My own theme song right here. Put out under MK’s 4th Measure Men guise, it pairs well with MK’s greatest hit from a year earlier. We all though the sample said “all hands” so we would all raise our hands when it played at Times Square.

Er, I regret limiting myself to 5 MKs here — and really I’ve only skimmed some of the hits — I’d love to include this one that sealed the New Jack Swing movement with a kiss, or this one that shows that MK is still alive and kicking, or this one, which will always hold a place in my heart. But this one, this one — I never even knew who did this one, but it followed me around during my formative house years and wouldn’t let go. I hadn’t heard it in 20 years until I started looking up MK’s works, and I could still remember every lyric (or at least every lyric I made up). I remember getting down to this joint at Menjo’s on Sunday nights in Detroit especially.