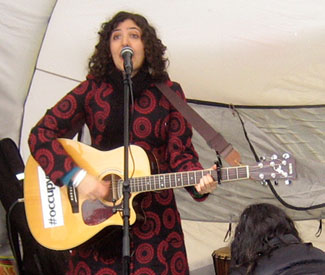 MUSIC Woody Guthrie would have turned 100 this summer, and numerous centennial celebrations mean that hundreds of people probably have “This Land is Your Land” stuck in their heads at this exact moment. But Guthrie was as much a political icon as he was a catchy folk singer. His “Union Maid” was the anthem of countless labor struggles, and he wrote a regular column for a communist newspaper. “This Land is Your Land” itself was penned in response to the complacent patriotism of “God Bless America.”

Political movements, of course, have always had soundtracks. Before Guthrie was singing the working man’s songs, the Wobblies were writing their own. Slaves sung — or whispered — about freedom as they traveled the Underground Railroad, and civil rights activists bellowed “We Shall Overcome” on marches and in jail. And for several years, the folk music scene was synonymous with the anti-Vietnam War movement.

While there is no one quite like Bob Dylan on the radio right now, or hoards of activists (that we know of) crooning from jail cells, plenty of local musicians are keeping up the tradition of writing and performing protest songs. If you ask any of them whether they’re primarily musicians or primarily activists, they’ll answer that the two identities are inseparable — and that 100 years after Woodrow Guthrie was born in Okemah, Oklahoma, the intersection of art and politics is still a completely natural one.

For Bonnie Lockhart, a member of the East Bay group Occupella, music inspired her to become a lifelong activist, and politics later supported her career as a musician. Growing up in conservative Orange County, she listened to civil rights songs on the radio. “I remember being so moved by the music. I had no context in which to understand what was going on in the South but because that music moved me, I pursued it and found out,” she explained. “It drew me into understanding that something was terribly wrong in our country and that people were doing something incredibly exciting about it.” Later, her involvement in the Women’s Movement gave her courage to pursue a musical career.

Activists have long recognized the power of song to raise morale and create cohesion. “Music is a powerful force for unity,” said Arthur Holden of the Musicians Action Group (MAG).

The amorphous MAG emerged from the more organized Bay Area Progressive Musicians Association, and now consists of a small group of veteran activists and anyone else wants to join them at demonstrations. Initially, music was a crucial political tool. “The police were not happy having picket lines blocking things and nobody knew what to do with a bunch of people with instruments,” said MAG clarinetist Gene Turitz. “When we saw the police coming we would get between the strikers and the police. It would at least stymy them.”

Now, one of the group’s primary goals is to preserve the sounds of historical struggles. MAG is one of the rare groups that continues to perform the Communist anthem “The Internationale.”

“Whenever we do it at a demonstration, someone comes over to us with tears running down their cheeks [in recognition],” Turitz said. The classic pieces have equal importance for those hearing them for the first time, Turitz said, recalling playing “Bread and Roses,” a tune about the Triangle Shirtwaist Factory strike, at a march on Cesar Chavez Day. “A guy in a Latino union group comes over and says, ‘That’s the most beautiful song, what’s it about?’ When I tell him, he gets thrilled. It’s that kind of thing we’re trying to preserve.”

Today, the concept of political musicians achieving commercial success might sound oxymoronic, and groups like Peter, Paul and Mary might seem a thing of the progressive past. “When I was coming up in the ’70s, you could record for real companies,” said Lockhart. “It was still capitalism but it wasn’t this voracious. The record labels weren’t into being monopolies, they were into having a niche.”

Others pointed to a more fragmented, diffused political scene to explain the lack of politics on the radio. But many believe that music is just as integral in contemporary struggles as it was in the past, even if the audience it reaches is smaller and the format is more innovative.

“I think our younger generation is just as engaged in art for social change,” said Talia Cooper, a 26-year-old Oaklander who performs original political songs at rallies. Some current Bay Area groups, such as the Brass Liberation Orchestra, consist mostly of younger musicians.

Cooper, who records under the name Entirely Talia, remembered going to long Occupy lectures at the beginning of the movement and watching the crowd become re-energized when she lead them in song.

“I used to think it was cheesy for people to say that revolutions need art,” Cooper said. “But if you think about what gets people to show up, it’s the beautiful posters, or the flashmob with the dancers, or the singing.”

Occupella meets Mondays from 5-6pm at the weekly “Tax the Rich” demo on Solano Avenue at Fresno Avenue, Berkeley.