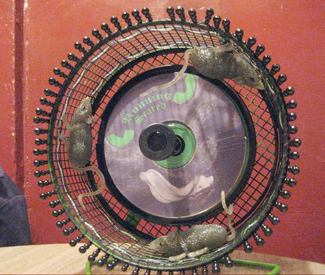 MUSIC The heyday of the mixtape was the 1990s, when a mix required a gentle touch with the pause button, careful calculations to make sure the songs fit on the cassette, and a delicate winding of the tape spool with the pinky finger, advancing the clear tape to the magnetic. They took hours to complete. They were fragile, often made in a torrent of teenage lust and given with sweaty palms.

With the San Francisco Mixtape Society, you get a semblance of that experience.

Every few months, the group holds free mixtape exchanges at the Mission District’s Make-Out Room. What happens is this: people come to the event with a mix (cassette, CD, or USB stick), and everyone gets a number. When your number is picked, you give your mix to the person who called your number. Then, you pick a number, and you get a mix in return. Each event has its own theme, to give attendees a spark of inspiration.

Most mixtape exchanges occur by word of mouth, or by invitation-only. Co-founders Annie Lin and John Verrochi, Brooklyn transplants, met by attending similar events in Brooklyn, which were low-key, “just hang outs in bars. We wanted to create an event that could accommodate more people, and make it easier to participate,” Lin said in an interview last week. The two of them started the exchange partly because there weren’t any events like it in San Francisco at the time.

“When I moved here I felt like there wasn’t really a channel for people that like music to meet other people that like music. When you go to a show, you really can’t talk to people. Part of it grew out of wanting to meet cool people as a newcomer to the city with no established clique. The nice thing is that a lot of people have actually come together,” said Lin.

“There is a dating aspect,” said co-founder Verrochi, “though we don’t promote that. You usually make them for someone you care about, so it kind of has this courting thing to it. People have definitely hooked up.”

The society gives a free beer to those who make a mix on cassette, and awards prizes in categories such as Best Art.

“We were thinking we would get to see cool graphic art, like really cool album covers,” Verrochi said. (He works by day as an art director.) “But it’s turned into these art objects. Tiny sculptures.”

Cases have been hand knit, papier-mâché’d, and encased in world globes. One person made a 3-D dollhouse. Another made a lemonade stand out of Popsicle sticks. The winner of the last event — the theme was “Under the Covers” — made a coffin. Inside was a collection of mixes that together formed a skeleton. The track listing came in a funeral booklet.

Besides winsome cover art, coveted mixes are well-sequenced and tell a story. “Editing is the secret,” said Lin. “In this era it’s so easy to say, ‘Let’s get on Spotify and do a search for titles that have the theme in the name.’ With a really good mixtape, someone really thought about the tone or the flavor of the theme, and how the songs come together over all. It’s more than just an algorithmic search for songs, which is easy to do.”

One memorable mixtape was made for a Treasure Island Music Festival event. The theme was “Hidden Treasure,” and the tape was called “Pirate’s Booty.” “Every single song on that mixtape was about ass,” Verrochi said.

Interest in the SF Mixtape Society has grown beyond its own events. Music festivals like SXSW have asked the group to run exchanges, and mixtape enthusiasts in Toronto and San Diego have asked how to start similar groups. It’s a reflection of people’s desire to do more than share music on the internet.

“We live in a curation culture,” said Lin. “People make playlists and share them on Spotify. Like, ‘Here’s all the songs that I’m listening to right now on this playlist in random order.’ A mixtape is sharing, yes, but it’s also selecting exactly what it is you’re going to share.”

“I think why people like our event is you actually have to show up in person, you have to create an object and hand it to them. And there’s this really tangible quality to it,” Verrochi said.

The SF Mixtape Society’s next event, themed “American Summer,” occurs Sun/15 at the Make-Out Room; a smaller exchange will take place as part of the California Academy of Sciences’ “Mixology, Mixtapes and Remixes at NightLife” event July 19. *