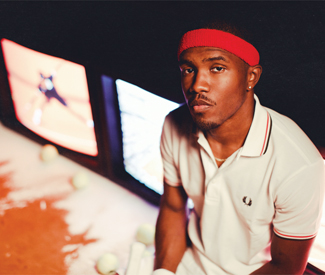 MUSIC If there was ever a genre that needed a good kick in the ass, it was R&B. For every Aaliyah, there have been ten J. Holidays, content to toe the party line and continue singing those same ol’ songs. Lucky for us, a slew of exciting artists (the Weeknd, Miguel, How to Dress Well) have revitalized the genre by crafting progressive work and bringing new influences and ideas into the mix. None has shone brighter than Frank Ocean.

After moving to Los Angeles in his late teens with only $1,200 in his pocket, the New Orleans native found work ghostwriting tracks for artists like Justin Bieber and John Legend. He didn’t really start making waves until he joined up with controversial, LA-based hip-hop collective, Odd Future, at the end of 2009. After signing with DefJam as a solo artist, Ocean struggled to get his debut LP nostalgia, ultra released, so he decided to do what many artists do: release it himself.

The free album lapped up critical acclaim and downloads, catapulting the 24-year-old to the upper realm of the blogosphere. It only takes one listen of nostalgia, ultra to see he isn’t your older cousin’s R&B singer. Instead of another disc full of tired come-ons and “I’m sorry baby” slow jams, the record is littered with soul searching, introspection, and fascinating storytelling all delivered in Ocean’s warm and effortless tenor.

The album’s lead singles deal with suicidal fantasies (“Swim Good”) and drug use (“Novacane”) with staggering perspective and clarity, something we aren’t used to hearing in R&B. Though he doesn’t shy away from heavy subject matter, he never lets it weigh down his buoyant, hopeful music. For a lot of artists, music is an escape, but Ocean understands that if you can find beauty in the struggle, there’s no need to search for an escape.

From there, Ocean worked with heavyweights like Kanye West, Jay-Z, Nas, and Beyoncé, while preparing his highly-anticipated proper debut, Channel Orange (due out July 17). Its lovelorn first single, “Thinkin’ ‘Bout You,” was a huge smash, and his first American tour sold out in nanoseconds. So we know the rest of the story right? Star rides his prodigious talent to the top of the charts, and spends the next 30 years counting money, living the dream, and collecting teacup elephants, right? Not so fast.

In the past four weeks, Ocean made two decisions that tell you everything you need to know about what makes him so different. First, on June 8, he released Channel Orange‘s second single, “Pyramids,” the most challenging single a mainstream R&B artist has released in recent memory. It’s an audacious, multi-movement, hook-free epic touching on time-travel, strip clubs, and ancient Egypt. And it is absolutely brilliant, probably the best song of 2012. While I’d imagine that Lyor Cohen and Co. greeted the 10-minute space jam with about as much enthusiasm as a colonic, it shows the scope of Ocean’s vision and his punk rock spirit.

That’s the magic of Frank Ocean; he is completely unafraid to challenge his listeners, and so far, they’ve stuck with him. But, on July 3, he gave them their biggest test yet.

Taking to his Tumblr, Ocean penned an articulate, heartbreaking post about his first love and subsequent heartbreak. The catch? The pronoun.

“4 summers ago, I met somebody. I was 19 years old. He was too. We spent that summer, and the summer after, together. Everyday almost. And on the days we were together, time would glide. Most of the day I’d see him, and his smile. I’d hear his conversation and his silence … until it was time to sleep. Sleep I would often share with him. By the time I realized I was in love, it was malignant. It was hopeless. There was no escaping, no negotiation with the feeling. No choice. It was my first love, it changed my life.”

The manner of the statement is pure Frank Ocean. On the eve of what was sure to be his greatest triumph, he risked everything in the name of truth. If you read the entire statement (which you should), he writes about the anguish and confusion he felt at the time, but also emphasizes the inherent beauty and innocence of first love.

In many ways, the statement reads just like a new Frank Ocean song: honest, beautiful, brave, painful, and incredibly emotive. Ocean has always been a hopeless romantic who has never been afraid to tackle heavy subjects with staggering honesty and clarity without regard for the conventions and conservatism of his chosen medium. And he does that here. That’s what makes him so special, as a man and as a singer.