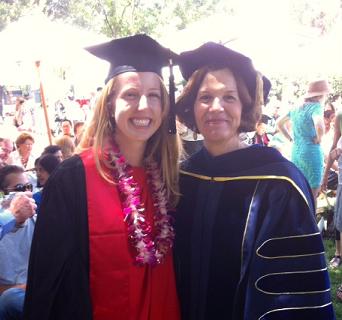 I hope you’ll all indulge me a proud papa moment, because it’s one that also has important public policy implications for California as state officials and voters wrestle with serious budget problems and a severely overcrowded prison system against the backdrop of conservative interests wielding more political and fiscal power than their numbers should indicate.

My oldest daughter, Breanna Jones, last week graduated with honors from Stanford University with a degree in public policy. At the ceremony, she received an award for her honors thesis – “California’s Tragedy of the Commons: How a Few Voters Disproportionately Influence County Use of State Prisons” – which I’m attaching as a PDF.

“California’s prison system has overrun maximum capacity, causing a public health conundrum, constitutional violations, and hemorrhaging finances. Even the public – which overwhelmingly endorsed past ‘tough-on-crime’ policies – has expressed its outrage about this waste of tax dollars. Recently, new research revealed that some California counties incarcerate more prisoners than the crime rate should dictate. That ‘surplus incarceration’ disproportionately contributes to the prison problem and thereby poses a significant tax burden on the state,” her report’s abstract begins.

Her research isolated a multitude of variables to show how it is the decisions that district attorneys in conservative counties make in how they charge crimes – with those prosecutors becoming especially aggressive after closely contested district attorneys races – that has the biggest impact on these high incarceration rates.

In other words, conservative attitudes toward crime and criminals are causing these usually small counties to have big impacts on the state’s prison budget – not to mention being unfair to those being sent to prison – something that ought to concern all of us.

Couple this with other studies showing that conservative counties also tend to use a disproportionate share of other state resources – and with the requirement of a two-thirds vote in the Legislature to raise taxes, which Democrats fall just a couple votes short of – and it becomes clear that these right-wing political attitudes aren’t benign. Indeed, we’re all suffering from the outsized influence of a vocal minority of state residents.

Luckily, voters will have some opportunities to correct this imbalance in November when there will be revenue measures that need only a simply minority to be approved, as well as measures that would repeal the death penalty and reform the Three Strikes You’re Out law, approval of which would begin to undo some of the damage done by these tight-fisted hypocrites.

California has lost its way and its balance. Luckily, the younger generation understands the situation and is willing to help us clean up the messes we’ve created for ourselves. It is the only thing that gives me hope for the future.