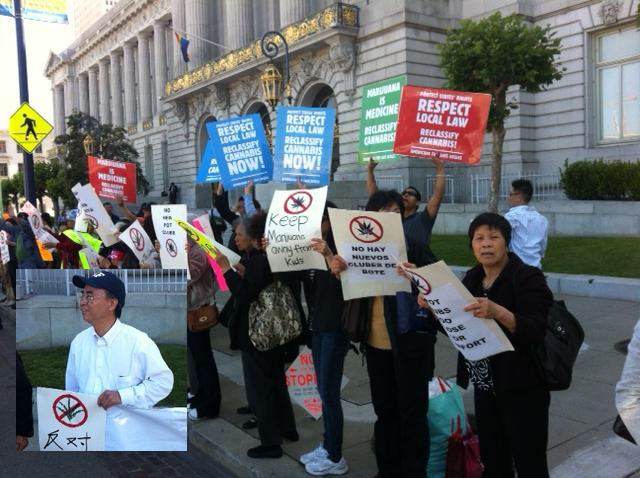 Dueling demonstrations in front of City Hall yesterday afternoon – with one side supporting medical marijuana dispensaries and the other protesting the city’s February approval of three new clubs in the Outer Mission/Excelsior area – preceded the Board of Permit Appeals decision to reject an appeal challenging Mission Organics.

That was the first of the three clubs to pull their building permits to open up shop in a part of the city that currently has no cannabis dispensaries. Yet a group of residents from the region – which includes District 11 supervisorial candidate Leon Chow – has been angrily agitating against the clubs and claiming they expose children to an illegal drug.

Bearing signs that included “Stay away from pot clubs” and “Keep the weeds away from kids” – most in both English and Chinese characters, with a smattering of Spanish translations – the predominantly Asian protesters squared off against a slightly larger crowd of medical marijuana supporters bearing signs that included “Respect Local Law” and “Marijuana is Medicine.” Together, it was a crowd of a couple hundred lining the sidewalk, drawing reactions from passing motorists.

Asked whether he would try to undermine the city’s system of regulating medical marijuana facilities if elected to the Board of Supervisors, Chow told us, “We’re opposing this, but I don’t think it would be my priority.”

Chow said he was “opposing high density,” noting that the Planning Commission approved three dispensaries in the area on Feb. 21, but he also raised concerns that the clubs make it easier for children to get marijuana, that they cater to healthy people just looking to get high, and that city regulations conflict with federal law.

“We don’t want healthy young people to be exposed to people coming out of medical marijuana clubs,” Chow told us. Asked whether he had similar concerns about bars and liquor stores, he said that he did but “there’s nothing I can do” to shut down existing businesses that sell alcohol.

“I don’t want there to be more liquor stores,” he said, although he assured us that, “I’m not a conservative, crazy, church-going Republican.”

Yet supporters of Mission Organics – whose workers will be represented by the United Food and Commercial Workers Union – did call Chow a hypocrite given that he works for SEIU-UHW. “So it’s a union representative opposing a union business,” said Matt Witemyre, an organizer with UFCW who was demonstrating in support of Mission Organics, which he said has agreed to a strict code of conduct that will make them good, responsible members of that community.

“The vast majority of the neighborhood is in support of the project,” Ariel Clark, an attorney representing Mission Organics, told us, characterizing protesters as a small yet vocal part of the neighborhood. The appeal was filed by Steve Currier, president of the Outer Mission Merchants and Residents Association.

Long after most of the protesters on both sides had gone home, the Board of Permit Appeals voted 3-1 to reject the appeal, clearing the way for Mission Organics to open on the 5200 block of Mission Street. But opponents have vowed to continue their fight and appeal the permits for the other two approved clubs – Tree-Med and The Green Cross, a venerable cannabis delivery service – when they apply for building permits.