Home A range of rage at Obama visit 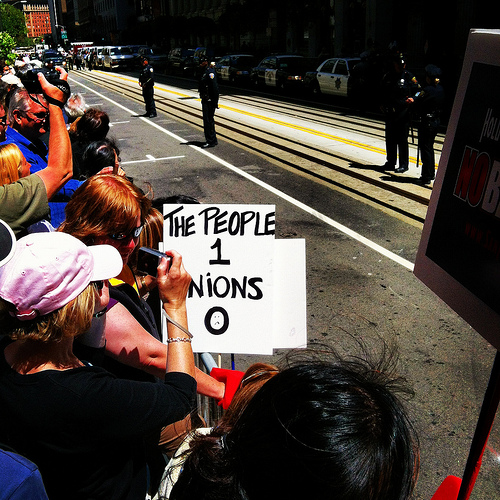 Hundreds gathered in the financial district today as President Obama came through San Francisco for a brief visit, consisting of a high-priced fundraising lunch and no public events. A mostly silent crowd waited patiently to watch the president’s motorcade drive by this afternoon, first at 1 Market St and then at 456 California, before he went off to SFO. On the crowd’s sidelines, handfuls of dissenters from various groups held signs and spoke up with a diverse range of reasons for protesting the president.

On Market, the motorcade went past the Occupy SF campsite at 101 Market St, where a dozen protesters had gathered. Their signs and chants focused on the National Defense Authorization Act. Sections 1021 and 1022 of the act, which the president signed Dec. 31 2011, have been interpreted as allowing for indefinite detention of terrorism suspects in the United States without charge or trial.

“Code Pink is asking Obama to kill the kill list,” said Nancy Mancias, an organizer with the womens’ peace organization, referring to a list of terror suspects targeted for US attacks that Obama personally oversees. “We want more transparency in the CIA drone program, and victim compensation to the families of those who have been killed in drone strikes.”

For demonstrators from the Center for Biological Diversity and Greenpeace, it’s imperative that the president stop oil drilling in the Arctic.

“There are a couple small permits they still need to get, but Shell is ready to drill in the Arctic in July,” said Miyoko Sakashita, an attorney at the Center for Biological Diversity.

Sakashita said that drilling there could be dangerous for residents of the region, as well as polar bears, walruses and seals.

“The conditions are terrible for drilling,” said Sakashita, citing low visibility and icy terrain. “If they can’t stop an oil spill in the gulf of Mexico, how will they stop it in the Arctic?”

If these conditons do indeed lead to a disastrous oil spill, Greenpeace volunteers will be there first hand to witness it, as the group plans to send vessels of their own to monitor the operations.

“It’s an issue of competence,” said Charles Cagnon, a protester who held a sign calling President Obama a “bad hire.”

“A president is our employee, not a king.”

But Cognan wasn’t too pleased with the competition either.

“I was a Ron Paul kind of guy,” he said, “but I’ll take Romney. He’s level-headed and competent, and he likes arithmetic.”

“Obama doesn’t like arithmetic,” he continued, as evidenced, according to Cagnon, by the senate rejection of Obama’s budget May 16.

Cagnon and his group sported “Nobama” gear, Code Pink protesters came with signature pink clothing and signs, and a Greenpeace volunteer was dressed as “Frostpaw the polar bear.” Focused for the day on a common enemy of sorts, no conflicts arose between the divergent protest groups. For his part, Cagnon added that despite his right leanings, he loves KPFA radio, and that he believes the tea party has a distrust of government in common with Occupy.

“I’m just glad there’s people out there dissenting,” he said. “We need people like that.”