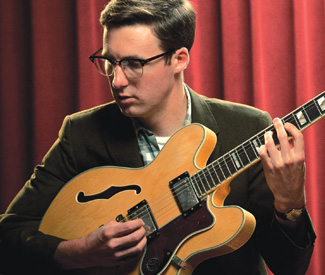 MUSIC Nick Waterhouse no longer calls San Francisco home, but the city’s fingerprints are all over Time’s All Gone, his effortlessly fun, debut LP. The retro-minded songwriter-producer crafts perfect little tributes to the punchy 1950s R&B sounds he’s been drawn to since he was a kid, all steeped with an endearing reverence for old-school record culture and recording techniques.

“We cut as live as possible, so a lot of the record is eight people in one room playing at the same time,” he explains. “Everybody’s gotta feel it together, and if they don’t, you really don’t have a song, in my opinion.”

As a Southern California kid growing up in the Costa Mesa area, Waterhouse approached his music listening from a studious angle, soaking up the Van Morrison and John Lee Hooker records of his parents, along with the Descendents and Sonic Youth albums he found. The well-rounded sonic diet can be heard within the frayed edges and garage rock appeal that Time’s All Gone has in spades.

“I listened to everything I could because I wanted to gain as much experience as possible,” he says. “I was the kid staying up for hours with the radio under the covers.”

By 18, Waterhouse had moved to San Francisco and quickly jumped headfirst into the DJ scene, spinning and building a network of like-minded cohorts at the Knockout’s Oldies Night and Saturday Night Soul Party at the Elbo Room, which brought him in touch with folks like Ty Segall and Mikal Cronin. No connection, however, would become as important to him as his relationship with Rooky Ricardo’s, the Dick Vivian-owned oldies-R&B-soul-centric gem of a record store in the Lower Haight.

“Rooky Ricardo’s informed a lot of how I developed as a person, and it’s all in the spirit of the place,” he says. “It’s got that clubhouse feel.”

Waterhouse recorded the saxophone-propelled blast of “Some Place” in the summer of 2010, an undertaking that he says was fueled more by a desire to sell vinyl copies to friends and fellow Rooky’s shoppers than to start a full-fledged music project.

“I really had no interest in it at the time,” he explains. “I figured I’d just keep making these 45s for fun and no one would even know who I was.”

After some nagging by friends to put something together for live shows, however, he caved and began recruiting players for the beginnings of what is now the Tarots, his perfectly complementary backing band. Together with Waterhouse’s guitar playing and expressive croon, the group uses horns, piano, drums, and female backing vocals to pay tribute to soulful R&B without ever falling victim to hollow mimicry or self-conscious irony. This is warm music made by passionate people with only the purest of intentions.

When it came time to record an LP, Waterhouse did what anyone who’s heard his music might expect and found an all analog studio in Costa Mesa called the Distillery to work out of. With the use of vintage gear, old ribbon mics, and classic recording techniques, he says that Time’s All Gone was constructed entirely with vinyl in mind.

“I can’t lie and pretend that as somebody born in the late-1980s I haven’t had moments of discovery because of digital music,” he says. And while yes, he has found music digitally over the years, he doesn’t have any vivid, concrete memories of those discoveries, the way he does with physical records. “I can still remember what listening station at Rooky’s I was at when I first heard a record, or what weird flea market I found something at. Having something tangible in front of you helps you associate.”

Waterhouse recently moved back to Southern California due to his quickly escalating, hectic tour schedule, but the plan has always been to officially release his album in San Francisco. In a beautiful bout of planning, Wednesday night’s show will not only mark the release of Time’s All Gone, but will also serve as a celebration for the 25th anniversary of the day Rooky Ricardo’s first opened its doors. Expect the dance party to start early and run late, as Waterhouse has enlisted the help of some of his favorite local DJs to spin before and after his set.

“In my mind, my album was born out of Rooky’s and out of a specific period of time in San Francisco more than anything else,” he says. “So this is my party for all the people and things that really mattered to me there.”