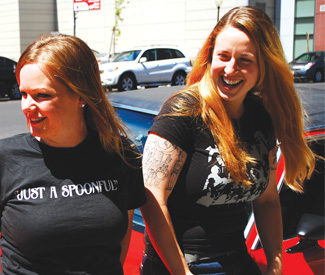 HERBWISE It’s Sunday afternoon and the hosts of Mutiny Radio’s Cannabis Cuts: The Next Generation have effectively commandeered the smoking lounge at SoMa’s Igzactly 420. They are deep into solving the world’s problems.

The crusade may just involve a pictorial calendar featuring sexy men smoking marijuana — a project which hosts Vaperonica Dee and Merry Toppins staunchly resist any attempts to qualify as frivolous. It’s about achieving parity in cannabis imagery, they say — much like their weekly podcast of marijuana news, product reviews, music, and banter.

“If you look at all the ads [for cannabis businesses and products], it’s sexy nurses or girls holding cannabis leaves over their tits,” Dee says between Volcano puffs. The young radio vet didn’t find that image particularly representative of her experience with the medicine (both she and Toppins are medical marijuana patients), so she jumped at the chance to work with DJ Wiid on his marijuana variety show at Pirate Cat Radio.

Merry Toppins and Vaperonica Dee plot their takeover of cannabis media (that’s not their car.) Guardian photo by Caitlin Donohue

Dee stuck with the project through Pirate Cat’s transformation into Mutiny Radio, the shuttering of its cafe and demise of its infamous maple bacon lattes — “I was excited!” she says. “I wanted to be in radio, I didn’t give a shit about the cafe” — and the exodus of her male co-host.

And when DJ Wiid moved onto new projects, it left the door open for an idea that seems nearly revolutionary in an industry filled with men: a platform for women’s perspectives on the cannabis movement.

Toppins was a natural choice as on-air co-host for Dee. The two had met when chef Toppins appeared on Cuts to hype her marijuana-infused olive oil that she had entered into the High Times Cannabis Cup. Toppins’ ebullience is the perfect compliment to Dee’s well-informed on-air tone. They both have natural radio voices, impeccable banter rhythm. “It was so cool to see a chick doing the news on a weed show,” says Toppins of their initial meeting. “I knew right away I’d either be their intern or host my own radio show.”

Listeners are responding. Toppins volunteers the following stats: 5,000 Cannabis Cuts podcast downloads each week, each one yielding an average of an hour spent with the two-hour long show. And though the women express views that aren’t always in lockstep with the cannabis establishment (a February 14 edition of the show highlighted a disempowering experience with Americans for Safe Access activists at a City Hall hearing and the two are candid about the fact that not all their tokes are strictly medicinal), many of the community’s luminaries have lent their support. They count Proposition 215 co-author Dennis Peron and Cannabis Action Network co-founder Debby Goldsberry as personal friends, and have interviewed Peron on the show.

The enthusiasm that has come their way makes sense — the continued strength of activists to improve cannabis access depends on developing and raising awareness about diverse viewpoints within the movement.