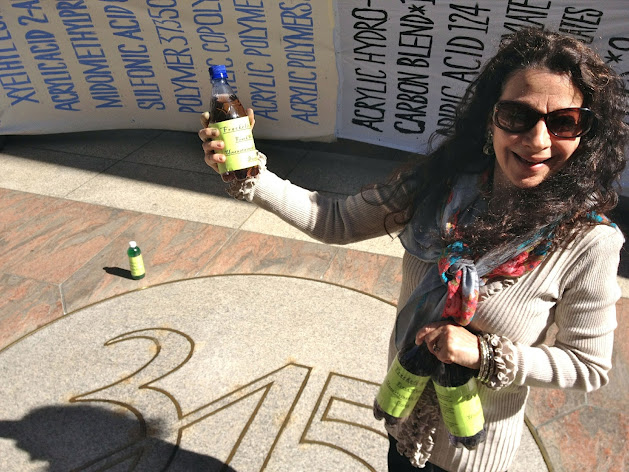 About 40 gathered outside Chevron’s San Francisco offices yesterday to mark its annual shareholder meeting. The demonstration was organized by OccupySF’s environmental justice working group, and used art and street theater to criticize Chevron’s involvement in hydraulic fracturing, a natural gas extraction process that may threaten parts of California’s water supply.

The afternoon protest came after a larger group showed up to Chevron’s world headquarters in San Ramon for the shareholder meeting that morning. According to Ginger Cassady of Rainforest Action Network (RAN), who helped organize the protest, it was a “big, colorful demonstration” with “over 100” in attendance.

Groups like the True Cost of Chevron and RAN’s Change Chevron campaign have been pressuring the company for years on a variety of issues. This year, workers and residents in areas where Chevron operates from Ecuador, Brazil, Angola and Nigeria travelled to San Ramon to voice their concerns. These ranged from oil-contaminated land in the Ecuadorian Amazon to an explosion on an oil rig off the shore of Nigeria in January. In that explosion, two workers were killed and more than 100 local people left the city for fear of contamination and other health risks caused by a fire that burned for months before going out on its own, despite Chevron’s efforts to contain the flames.

About 30 activists from around the world entered the meeting with proxy votes, according to Cassady. None interrupted the meeting, instead waiting their turn to speak. There were no arrests.

Some people with proxy votes, however, were not allowed access to the meeting. João Antonio de Moraes, national coordinator of Brazil’s United Federation of Oil Workers (FUP), was not allowed access, along with two representatives from United Steel Workers. Another worker, at the meeting to present in support of a resolution for worker safety, was initially blocked from entering but allowed access after a dispute, but had his presentation notes confiscated.

At the meeting, Chevron CEO John Watson announced “tremendous performance momentum” for the company, with “earnings of $26.9 billion” in the past year, according to a press release.

“Watson reinforced Chevron’s long-standing culture of safety and environmental stewardship, and resulting industry-leading performance,” the press release states. “He also highlighted Chevron’s commitment to partnerships that address health, education and economic development issues in the communities where the company operates, and Chevron’s global social investments of approximately $1 billion over the past six years.”

But Chevron is also suffering financially due to liability following oil spills, explosions, and contamination, a concern protest organizers say Watson failed to address. Representatives from Chevron did not return calls for comment.

The company recently settled with plaintiffs in Ecuador after an appeals court there ordered that they pay $18 billion in fines for spilling and deliberately dumping a total of 345 million gallons of crude oil in the Amazon rainforest of northeastern Ecuador.

“We believe this presents a conflict of interest that can result in excessive management influence on the board of weaken the board’s management oversight,” read the proposal.

The proposal, along with several others, mentioned the Ecuador lawsuit, saying “we believe that independent board leadership is key at Chevron, given the questions raised about the oversight by the board of the CEO’s management and disclosure to shareholders of the financial and operational risks to the company from the $18 billion dollar judgment in the Ecuadorian courts in 2011.”

“With all these major legal liabilities that Chevron is facing a lot of people are concerned,” said Cassady.  “Chevron is profitable at the expense of worker safety, the environment, human rights and our economy.”

Other stockholder proposals dealt with safety, transparency, and the environmental impacts of Chevron’s international operations. A proposal asking Chevron to disclose money spent on lobbying received approximately 23 percent of votes, a proposal asking for a report on what the company has done to reduce the risk of accidents like the Niger Delta explosion received only eight percent of the vote, and a proposal that Chevron nominate a new board member with environmental expertise failed as well with 23 percent of votes cast.

Shareholders also voted on a proposal that Chevron release a report on the financial, environmental, and community impacts of hydraulic fracturing, the focus of the afternoon protest in San Francisco. The proposal received about 27 percent of the vote.

Hydraulic fracturing, or fracking, is the process of extracting natural gas by injecting dense underground rock formations with a pressurized mixture of water, sand and chemicals. It has been hailed as an environmentally friendly alternative to oil drilling, as natural gas burns cleaner than oil.

But protest movements have coalesced around fracking practices in the Appalachian mountains region and above the Marcellus Shale, as residents report toxic chemicals in their water supplies, endangering drinking water as well as water used for raising livestock and growing food.

The 2010 documentary Gasland included now notorious footage of residents near a Pennsylvania fracking operations whose tap water bursts into flames.

Fracking operations in California are less well known. The protest outside of Chevron’s San Francisco offices yesterday drew attention to this issue- and the extensive list of chemicals present in fracking solution.

“It’s happening in California, but it’s not really talked about” said Ellen Osuna. Osuna now lives in San Francisco, but moved from New York, where she says she worried about her water supply since it comes from aquifers near the Marcellus Shale.

“It’s not even halfway through the A’s” said Sakheim.

She also handed out bottles of water oil-colored water labeled “Frackelicious Frackwater Unsustainable Energy Drink.” The label listed some of the more toxic chemicals involved in the process under “ingredients” along with “no preservatives, no artificial flavors, 100 percent poison.”

According to a report released by the Congressional Committee on Energy and Commerce, fracking fluid contains 750 chemicals, which “ranged from generally harmless and common substances, such as salt and citric acid, to extremely toxic substances, such as benzene and lead” as well as many carcinogens, according to the report.

These chemicals, along with gas itself, can enter water supplies when the casing on wells cracks or when wastewater containers spill.

The Safe Drinking Water Act of 2005 specifically exempts hydraulic fracturing, a lack of regulation known as the Halliburton Loophole.

In between chants of  “ban fracking now!” Sakheim told me that she spent several months painting the banner, and plans to continue the project of listing the chemicals involved in fracking in artistic form.

“I have three kids,” said Sakheim. “I really worry about what will happen to them with these corporations having so much control to influence government.”