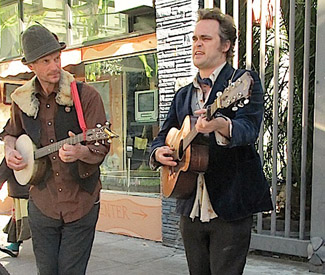 CULTURE It’s the tangible buzz I notice first, a tingling awareness of something important about to occur, followed swiftly by the realization that there are free quesadillas courtesy of the Great Tortilla Conspiracy, silk-screened with chocolate sauce and rabble-rousing sentiment: “Eat the Rich.”

It’s opening night for the ambitious Streetopia festival, and the scene outside the Luggage Store Gallery is vibrant and chocolate-scented. On the sidewalk, Brontez Purnell scrawls ritual sigils in bright pink chalk, while a watchful Amara Tabor-Smith, in Butoh face paint and bare feet, leans against a tree, waiting to enter the circle and begin her ceremonial dance. Festival co-curator (with Kal Spelletich and Erick Lyle) Chris Johanson is overheard gushing unselfconsciously about the “vibe,” and among the gathered throng of artists and tourists, Sixth Street residents and urban activists, bookworms and cinephiles, tastemakers and thinkers, old punks and new parents, it’s as apt a descriptor of the electric excitement as any.

Inside the Luggage Store itself, a fanciful reimagining of the space awaits, just past the heavily-graffitied stairwell and the bright shock of Day-Glo paint and black light of the entryway. A multi-level, wooden loft structure dominates the gallery itself, crammed with little nooks in which one might find a contemplative interactive art project involving paper boats, a tribute to Valerie Solanas, a solitary disco ball, a pirate radio set-up, a “live open letter office,” and countless murals, photographs and sculptures — frankly too much to absorb in one sweep through.

Down Market Street, beneath the Renoir Hotel, the cacophonous screech and throb from Shaun O’Dell’s noise installation “THE SOMETHING” attracts the curious, with amplifier knobs to twiddle, an out-of-tune ukulele to bang, synthesizers to desynchronize, and numerous cameras to record the emphatically spontaneous proceedings on. A rare opportunity for the public to visit the San Francisco Drug Users Union to view an art installation by Barry McGee, plus the promise of free food at the Tenderloin National Forest/Luggage Store Annex at 509 Ellis, entices the intrepid to wander further afield, into the TL night.

Impressively all-encompassing by any measure, Streetopia’s first weekend (it opened May 18) included nods to almost every possible artistic discipline with participants from all corners of the country. It gave space to panel talks, such as AIDS chronicler and former ACT UP activist Sarah Schulman’s “A Gentrification of the Mind” (an event co-curator Erick Lyle was eager to point out represented “the multi-generational teaching and sharing aspect of Streetopia”). It reinvigorated the idea of food as communion with Sy Wagon’s Free Café, the previously-mentioned Great Tortilla Conspiracy, and the War Gastronomy Food Cart; precipitated an off-site “spirit gardening” event at the Hayes Valley Farm with performance artist-musician Ryder Cooley; and hosted the kickoff to “endurance” performer Marshall Weber’s 72-hour poetry reading — a marathon that made that morning’s Bay to Breakers run look even more inconsequential than usua l.

My favorite moment of the project thus far, however, came on the evening of May 20 at the Tenderloin National Forest during an all-too rare performance by dark folk minstrels Hazy Loper, currently a duo comprised of Devon Angus and Patrick Kadyk. Torn between our desire to listen to the mournful melodies and observe the onset of the solar eclipse, the entire crowd wound up in the street squinting at the sun through postcard pinholes, loosely-clenched fists, the holes of a colander, and the leaves of a nearby tree, while the band gamely finished their set out on the curb for the whole neighborhood to enjoy. It was an experience that, for me, best encapsulated a straying from the script that the entire Streetopia project seems designed to encourage: offering a framework for building lasting interpretations of an urban utopia, rather than an experience ready-made and soon forgotten.