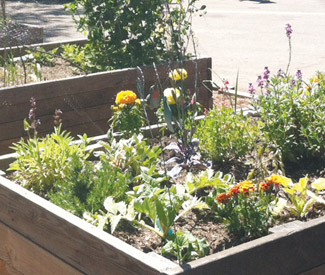 
Greg Gaar knows the names, characteristics, and birds and butterflies attracted by every plant in the native plant nursery that he tends. Last week, he proudly toured me through the garden, pointing out plants like Yarrow ("great for bees and butterflies") and the beautiful flowers of the Crimson Columbine, of which Gaar believes there are "only two others left in San Francisco."


Gaar has been working at 780 Frederick St., where he now tends the garden, for decades. His mother went to high school on the same block, the old site of Polytechnic High. Before Gaar became the gardener, he ran the recycling center that Haight Ashbury Neighborhood Council (HANC) operates next to the garden. Now, the pioneering green operation he helped build may shut down.


At the center, people can recycle their bottles, cans, paper products, and even used vegetable oil, and make some cash along the way. Those who use the center say it's a green and dignified way to make some money.


But residents in the surrounding area have complained for years that the center is loud and attracts homeless people. They also say that, due to their proximity to the recycling center, the chance that their trash will get rifled through at night is greater than in other parts of the city.


Citing these concerns, the center's landlord, the San Francisco Recreation and Parks Department (RPD), has spent the past few years trying to evict the HANC recycling center. The center got an eviction notice in December 2010. HANC's lawyer, Robert DeVries, successfully challenged the eviction. RPD sued for eviction again in June 2011, and that matter may finally come to a close June 6 when it will be heard by a three-judge panel in SF Superior Court.


Since then, HANC staff got to work building its own community garden. In just a year, they erected 50 beds from recycled wood, and according to Gaar, about 100 neighbors have plots that they currently tend.


Dunn emphasizes that no city money was used to build the current community garden. The city had laid out a $250,000 budget for the garden after it was approved and designed in 2010.


A bundle of documents containing arguments against HANC, provided by RPD, includes details of the Golden Gate Park Master Plan, surveys indicating a great need for community gardens in San Francisco, and letters and statements from neighbors complaining about the recycling center.


A 2004 survey discussed in the documents found that community gardens are among the top "recreation facilities most important to respondent households." Community gardens came in fifth in importance, after walking and biking trails, pools, fitness facilities, and running and walking tracks. The documents include a detailed map of the "Golden Gate Park community garden preliminary plan," imagined at HANC's current site.


The map was drawn up in November 2010, the same month that a meeting of the Recreation and Parks Commission laid out the reasons that HANC had to go. Minutes from the meeting include the city's need for community gardens as well as some neighbors' disdain for the recycling center in that site. It argues that the needs of recyclers can be well met with other recycling centers in the city.


Seventeen other recycling centers operate in San Francisco. Most are located in neighborhoods on the city's edges, with a few in the Outer Sunset and Excelsior, although most are located in Bayview-Hunters Point.


But the commission doesn't seem concerned with potential nuisance to neighbors in directing more traffic to these other recycling centers, or with the difficulty poor recyclers have in getting out there. "The San Francisco Department of the Environment is confident that recyclers that use the facility will take their material to another existing site for proper handling," according to the meeting's minutes.


The commission is, however, concerned about a nuisance that the recycling center creates for Haight-Ashbury neighbors, according to the minutes. The notes cite "neighborhood noise, truck traffic, litter, and public safety concerns as negative impacts related to continuing operations at the site."

But is this really just another case of resentment against people who are poor and homeless?


HANC's Dunn argues that, in fact, much of the material that those who use the center bring in isn't taken from residential waste bins. Besides, it's not technically "HANC's CRV redemption program" that encourages recycling as a revenue source for the less fortunate. State law requires that consumers be able to redeem bottles and cans for cash.


The meeting minutes argue that the recycling center "enables illegal camping and illicit and unhealthy behavior in Golden Gate Parks' eastern end and in neighborhoods in close proximity to the site."


Supposed evidence for the position cites letters to the editor published in the San Francisco Chronicle, a frequent outlet for anger at the homeless. One concerned resident, Karen Growney, asserts that the center "provides no benefit to people living in Haight/Cole Valley."


HANC disputes this, saying that many neighbors use the center. They have beneficial relationships with many nearby businesses, including New Ganges restaurant just across the street. Its website, kezargardens.com, shows many smiling neighbors who use the center to recycle.


Notable among them is actor/activist Danny Glover, a Haight resident since 1957. In a video on the website, Glover — interviewed while in his car dropping off recycling at the center — says, "I would be dismayed and not happy if we close this wonderful recycling center down…It would be a tragedy, and a great loss to this city and this community."


In her letter, Growney also laments that her family "had to pay a considerable amount to build a wrought-iron, locked gate to keep people out of our trash." Another letter, written by neighborhood resident Curtis Lee, asks that the city "eliminate the Haight Ashbury Recycling Center," saying that, "It is a blight on the neighborhood and an attraction to rodents and homeless carts."


Of course, those carts come with people. HANC takes issue with the assertion that their services "enable" or "encourage" homelessness, as well as the assumption that the recycling center only serves the homeless.


Dunn says that many of the recycling center' clientele are elderly immigrants, often housed, who contribute to their family income with cash from recyclables. He also insists that "most of the people that use the recycling center don't camp in the park."


Homeless people certainly do use the center, but it's not clear whether its presence truly "enables illegal camping and illicit and unhealthy activity." Dunn finds it laughable to say that "the center creates homelessness." It's a lot of work to cart around recyclables all day, he says, and the dedicated recyclers are generally not the same people that ask tourists on Haight Street for spare change.

There is a great diversity in how homeless San Franciscans spend their days, and recycling is in many ways a specialized, committed way of life. In her 2010 ethnography of homeless San Franciscans, Hobos, Hustlers and Backsliders, Teresa Gowan focuses on the "recyclers," the segment of the homeless population who have made a habit of collecting bottles and cans as a way of getting by.


"The phenomenon that captured my interest was the steady stream of shopping carts loaded high with glass, cans, cardboard, and scrap metal rolling past my door," she wrote.


Some of her interview subjects show disdain for the recyclers, who work hard all day and don't get much cash out of it. Dealing drugs, stealing, or panhandling can be more lucrative and less backbreaking. One subject, a man named Del who, according to Gowan, mostly stayed in the Tenderloin, thought the "20, 25 bucks on a big load" that recyclers usually made was pathetic. "'And that's for heaving around a big old rattling buggy all day,' Del said pityingly. 'I can make 15 bucks inside'a two minutes.'"


But many of her interview subjects prefer to recycle anyway. Gowan describes another subject, Sam, as "a champion recycler, muscular and persistent, who often put in nine, ten hours on the trot." She quotes Sam saying, "Without this, I'd kill myself. Couple a days, I'd do myself in…. You get some guys, seems like they can deal with homelessness. I'm not one of them."


The book argues that "pro recyclers" included a "large core group who had created an intense web of meaning around their work as a kind of blue-collar trade."

Recycling for cash may not be a respected or taxed job "blue collar" job. But it's certainly green.


Since the center began operating in the 1970s, mainstream attitudes towards environmentalism and sustainability have shifted dramatically. The HANC recycling center was a product of the environmental movement, and helped usher in the widespread support for recycling.


Now, with curbside recycling fully functional in San Francisco, many call the recycling center's work obsolete. But HANC argues that the city needs all the help it can get if it is to reach its goal for zero waste in 2020. It also employs 10 people, and Dunn argues that it would be foolish of the city to eliminate those stable green jobs.


HANC has also helped move along the trend towards community gardens that RPD is now embracing so thoroughly that, ironically, it could lead to the recycling center's demise. HANC helped underwrite the Garden for the Environment project as well as the Victory Garden planted outside City Hall in 2008. Dunn says that the staff enjoyed the challenge of building the garden, and would be interested in helping the city by creating more gardens without city money.


Gaar says he's committed to continuing to work for a healthier planet, regardless of what happens to the center. He and the other HANC staff have come to see the eviction process as symbolic of a direction in which the city's heading, that also includes last year's Sit-Lie Ordinance: decisions designed to shuffle homeless people out of wealthy neighborhoods.
The arguments for the community garden, however, seem to indicate a strong desire for a greener city. It's not easy balancing environmental initiatives with NIMBY woes — especially when your backyard is Golden Gate Park.