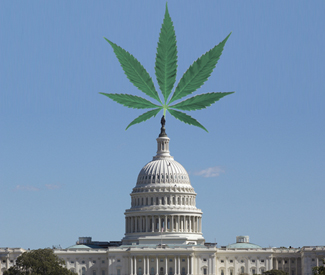 HERBWISE A few days after House Minority Leader Nancy Pelosi finally voiced her displeasure that federal agencies were making moves to curtail medical marijuana access, I was touring the hallway outside her offices in Washington DC.

“Access to medicinal marijuana for individuals who are ill or enduring difficult and painful therapies is both a medical and a states’ rights issue,” said Pelosi in a statement released on May 2.

And though Pelosi was surely spurred to speak on behalf of her federally-beleaguered California, she gets good reminders of cannabis’ import in her adopted home in Washington. Here, the fight for medical marijuana is finally coming to a head: six cultivation centers have been given final approval and four preliminary approval to open.

“It seems likely that patients will have access to medicinal marijuana later this fall,” said DC councilperson David Catania. Catania is a primary figure responsible for penning DC’s cannabis regulations. He is also — in the words of one local cannabis activist who shall remain nameless — “a gay, Republican-leaning Independent corporate lawyer-type. He is both bright and brash, bordering on arrogant. He is so adamantly anti-California medical cannabis laws that most of the tight restrictions here are driven by his stark dislike for what California’s laws have become.”

Well! Since I was darting about our nation’s capital anyway, an interview seemed to be in order so that councilperson Catania could let us know just how DC regulations worked — and what is was like working on marijuana issues in an office situated less than a mile from the Capitol Building and a block or two from the White House. I spoke to him via email last week.

SFBG You played an integral role in setting up cannabis rules and regulations in DC. Were you drawing on things that work or didn’t work in any specific areas of the United States?

David Catania We set out to implement a well-regulated system that was still accessible for those who need the medication. As we are the nation’s capital, we knew the spotlight would be on the program. We set out to create a system that worked for patients in need and I believe we are well on our way to accomplishing that goal.

SFBG What would you like to see happen with dispensaries in DC?

DC The four dispensaries that have been given preliminary approval are in various neighborhoods throughout the District, each with its own needs and concerns. The District Department of Health is doing extensive community outreach and work to involve residents nearby both dispensaries and cultivation centers, to educate them on the program and ensure open lines of dialogue between cultivation center and dispensary owners and their neighbors. Ensuring that positive relationship between the various parties is going to be a vital component of the program’s success. [note: in DC, dispensaries have been regulated as separate from cultivation centers, which are allowed up to 95 plants per location, an amount which was designated as to avoid harsher punishment in the case of federal action.]

SFBG What is it like setting up regulations regarding a federally illegal substance here in the shadow of the White House?

DC It’s interesting. We were very intentional in how we established the program, as we realized we needed to be extra-sensitive to the fact that we are the home of the federal government.