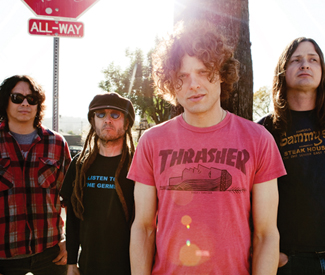 MUSIC Burning Brides guitarist Dimitri Coats was in Keith Morris’ tip-of-Los Feliz living room one afternoon when he turned to Morris — Black Flag co-founder and longtime Circle Jerks vocalist — and asked: “Keith, if you were going to start a new band, who would you play with?”

It was a pretty short list. Bassist? Keith wanted Steven McDonald of Redd Kross. And for drums he listed former pro skater Mario Rubalcaba of Hot Snakes, Earthless, and Rocket From The Crypt fame. All the men were game, and, thus, a supergroup was born. Since its late 2009 formation the band, OFF!, has slowly spawned a reputation for an aggressive punk return to form and wildly entertaining, chaotic live shows.

Of course, having four viable and seasoned musicians stuffed in a band has its share of complications. When Morris peeks at the tour schedule grid many of the dates are blacked out due to other commitments, such as children and concurrent bands. Like, say, if Rubalcaba has to be whisked away to Australia to play with Earthless for a week.

“I want to be mad and angry but he’s a drummer, and any great drummer is not going to be in one band,” explains Morris diplomatically. It’s these other life obligations that have sped up OFF’s process. Their time is condensed.

Two weeks after that living room conversation they were already rehearsing — ” just banging and clashing and thumping and making loud sounds” — and it was sounding good, only it wasn’t the sound Morris had envisioned, he says. He’d wanted it to sound like Black Flag.

But he had an epiphany in the car ride home from the rehearsal space after, “you’re playing with these great players — nobody told Jimi Hendrix what to play, nobody told Greg Ginn what to play,” Morris recalls. “It’s like, you’ve done this long enough, continue doing what you’re doing.”

Soon after that first rehearsal, the group began releasing blistering seven-inches, which were then assembled into the First Four EPs vinyl box set and CD comp.

Last year, OFF! was at LA’s Kingsize Soundlabs, recording a raw, frantic self-titled full-length for VICE Records over a three day period. Morris claims they did it in even less time, thanks to the realities of life. “We tell everybody three days, it wasn’t really three days. You need a break to go to the bathroom, you need a break to go smoke a cigarette, you know you’re going to eat a couple of meals and I mean good meals, you don’t eat like, Taco Bell,” says the diabetic vocalist.

In the end, the album — which was released this month — actually does have some powerful elements of early Black Flag — all rapid tempos, heavy power chords, and Morris’ thick, instantly recognizable holler. Single “Wiped Out” could be a rare, cleaned up B-side to Nervous Breakdown, salt-watered, anxiety-driven punk pandemonium, which leads to one to wonder if Morris is perhaps messing with journalists today?

Back in that edge of Los Feliz living room — in a house not too far from the homes of rapper Bronx Style Bob, Gwen Stefani and family, and one of the three musical Haden triplets — the 56-year-old punk singer is pacing on the phone thanks to another of his five to seven interviews of the day. He’s just glad he doesn’t have to do mundane chores at the moment like take a bath, or figure out what to eat for breakfast. And he’s optimistic about the future of this new band.

He may not see the precise Black Flag impact on the music, but he says the vibe of OFF! is very similar to his first band at the start, the pioneering act that began 30 years back in surf punk haven Hermosa Beach.

“It was me going all the way back to the very beginning, when I was in Black Flag, when we didn’t know what we were doing. It was just ‘we’re going to do this, and we’re going to have fun. We’re going to go wherever this can take us,'” Morris says. “I think that’s what applies here, it’s something I’ve had in my heart, and carried around with me all of these years — just play it by ear.”

Later, in the same eerily recognizable, nasal-intoned voice he adds, “Not only am I excited, but I’m happy being in this band.”