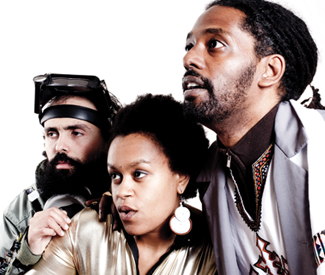 MUSIC Singer-songwriter Meklit Hadero’s album On a Day Like This garnered tons of praise and cemented her status as SF’s flower-adorned local celebrity. As a TED fellow and the Red Poppy Art House’s former artistic director, Hadero also established an ability to cross-pollinate her far-reaching talents.

But with her latest project, Copperwire (www.copperwiremusic.com), it now appears that the chanteuse is ready to cross into music’s final frontier. Copperwire’s music tells stories about connection and distance through cosmic metaphors. The group just released its debut album Earthbound and is currently bringing its hip-hop space opera to life-forms across the country.

[You can have a listen to exerpts from the album and more from Hadero on the creative process here.]

MEKLIT HADERO: Copperwire is myself and two Ethiopian-American emcees, Gabriel Teodros and Burntface. The whole project started with a song called “Phone Home.” We were sitting on a couch and we just looked at each other and suddenly put our index fingers out, and when they touched we all said “phone home.” We were like wait a minute, because ET also stands for Ethiopia. It started from that spark, and we ended up writing the song in two to three hours.

SFBG: From there you decided to make a full-length album?

MH: Well, we didn’t want to just make a record. We wanted to tell a story in a way that felt relevant and fresh to all of us. Earthbound uses metaphors of intergalactic distances to talk about diaspora and cultural connection and disconnection.

Last December I became a member of the SF Amateur Astronomers. I was hosting the deYoung’s Van Gogh Starry Night event and the Amateur Astronomers were around the pond outside. They had about nine or 10 different telescopes that you could look through. I saw the moon, but I also saw Jupiter and four of its moons. It was an incredibly impactful moment for me, especially since I’d been thinking about the reality of these distances that we talk about.

Gabriel had been reading a book by Neti Okorafor, who’s a Nigerian science fiction writer who wrote a book about the Sudan in the future. And all three of us are total science fiction buffs. I love Star Trek.

MH: The Next Generation… TNG, that’s my era. Yes, I know that I’m revealing my inner dorkiness. Anyway we’d been talking about making a record together for years, and after being in Ethiopia together we were just like it’s time. Crossing that distance while these metaphors were churning kind of came out in the story.

SFBG: Do you relate Copperwire to intergalactic ’70s acts like Funkadelic?

MH: Definitely. It’s also in the line of Outkast, Janelle Monae, David Bowie. It definitely feels like it’s in an intergalactic lineage.

SFBG: Tell me about the star sounds that factor into Earthbound.

MH: While we were recording I saw a posting by one of my fellow TED fellows about an installation in the Bavarian forest that had been done with star sounds. I sent her an email asking “What are these star sounds and how can I get some?” We figured out how to use them in our beats using a program called the isotope spectrum, and used the star sounds in combination with a whole bunch of instruments.

SFBG: What about the star guitar?

SFBG: How many different stars are you working with?

SFBG: Do you know their names?

MH: I don’t and I don’t know where they are, that’s one thing I want to talk with Jon about. But he’s also posting a whole host of new star sounds so I’ll have a lot more to choose from pretty soon. *