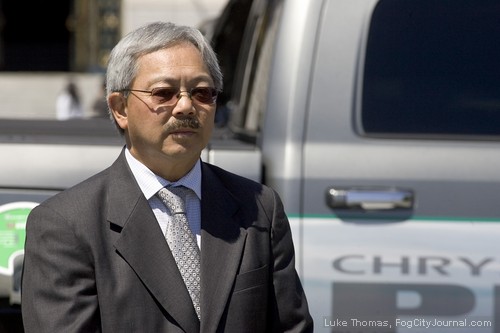 Tech tax talks. I’ve always wanted to use that headline.

And of course, the meetings in the Mayor’s Office on the city’s business tax involve more than the tech folks — but from what I hear, they dominated the discussion.

The issue is the way the city taxes businesses. Way back in the 1990s, the city had two types of tax — a payroll tax and a gross receipts tax. The system was complicated, but essentially, companies paid a portion (about 1.5 percent) of payroll or gross receipts, whichever was higher. That made a certain amount of sense; since under California law, cities can’t tax corporate income (profits), there’s no simple way to enact a perfect local tax, but payroll and gross receipts are both rough approximations of the size of an company.

But in the late 1990s, a group of big corporations, including Pacific Gas & Electric, Chevron, Bechtel, the Gap, Levi Strauss, General Motors, Equity Office Properties, Eastman Kodak, Safeway, Charles Schwab, the Hearst Corporation, the Giants, Macy’s, Neiman Marcus, Nordstrom, the Shorenstein Company, and others filed a lawsuit to overturn the tax system. We called them the “Filthy 52.” The gross receipts tax was unfair, they argued — and in 2001, with only three dissenting votes, the Board of Supervisors settle the suit by repealing that part of the tax structure.

Since then, the city has lost about $30 million a year in tax revenue.

And now the gross receipts tax is back — because some companies, particularly tech firms, want to get rid of the payroll tax. The argument is that a tax on payroll discourages job creation, which is complete bullshit. The truth is that some companies (particularly tech startups) have a lot more payroll than gross reciepts. So they want a system that lets them pay lower taxes.

(That’s a tech thing, I guess — not paying taxes.)

Now: A gross receipts tax, combined with a commercial rent tax, is probably a better way for the city to go. But there are winners and losers, and a lot of the old downtown types (finance and commercial real estate) would be among the losers. So the meeting to discuss all of this was heated.

Among other things, Ron Conway, Mayor Lee’s buddy and a big tech investor, stood up and basically told everyone else to take a hike.

“Tech jobs are important,” Scott Hauge, a small business advocate, told me. “The problem was that at the meeting, the tech people didn’t seem to understand the other side. Everyone was pretty well behaved, but then Ron [Conway] stood up and said, ‘this is good for tech, so the rest of you figure it out.'”

Now Ed Lee has to decide: Is he going to cross the Building Owners and Managers Association to please Conway? Or the mayor who has hitched his political star to the likes of Twitter, airbnb and Zynga going to tell those folks that they have to accept a compromise that might force some of them to pay a little more?

That’s just the internal politics. The overall shape of the potential tax reform is a much bigger issue.

For starters, any discussion needs to include a way to recover the $30 million a year that the city lost to the Filthy 52. If the mayor wants to make his package “revenue neutral,” it needs to be based on the 2001 figures (adjusted for growth and inflation), not on what the business community is paying now.

And that’s only the tiniest bit of the city’s revenue needs. Realistically, given all the state and federal cuts and the cuts San Francisco has already made to the safety net, the city should be looking for about $250 million a year in new revenue. That might — might — make up for the dramatic cuts that have been made over the past five years.

Then the structure needs to make a distinction between the giants and the tiny players. There’s no reason the city should have a flat business tax; why should the Gap pay the same percentage of gross receipts as a food truck or a corner store?

I’m glad that city officials are finally talking seriously about tax reform. But from the looks of things, this is going to turn out badly. Check out the list of invitees (see the link above). Nobody from labor. Nobody from social services. Nobody from the affordable housing groups. Nobody except business types — who, for the most part, are thinking only about how to keep their share of the taxes from going up.

If we wind up with an Ed Lee tax plan that shifts the burden around among business interests but doens’t even bring us back to the pre-2001 levels and includes no net revenue gain, the mayor’s going to have a fight in November. Because I can pretty much guarantee there will be a community alternative.