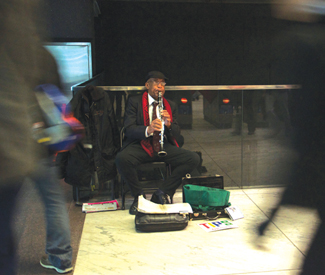 MUSIC From classically trained conservatory graduates and seasoned performers to self-taught beginners, the musicians that play throughout the city’s transit stations claim it’s one of the best places to earn a living busking.

“The people here really cherish music,” said longtime jazz musician Don Cunningham, who played in several other cities before settling in San Francisco over three decades ago. Now a recognized faced within the BART music scene, Cunningham has regulars who look forward to hearing him play familiar tunes on his clarinet, even if only for a brief moment on the way to work.

While the stage might not be glamorous, many underground performers are talented musicians. And with oftentimes uninterested audiences and unsteady pay, they’re taking a risky shot at doing what they love.

Making minimum wage can take several months, said violinist Christa Schmid, who has played in San Francisco for about four years. “When I first started playing in the city people tried to kick me around because I was new and younger,” she said. “I get a certain amount of respect now — people know me.”

Like Schmid, all underground musicians — whether busking for a living, supplementing their income, or simply playing for publicity — must learn how to operate in a system full of unspoken rules.

Every morning and afternoon during rush hour, musicians must race to secure a corner or hallway in the busiest downtown BART stations. While some attempt to stake out the same spot every day, others prefer mixing it up — and sometimes they don’t have a choice either way. The most important rule is setting up far enough from another musician.

On average, most musicians play for two to three hours per day in one location, as anything more is disrespectful to others vying for a spot. But just like the musicians themselves, theories vary on what times and which spots are the most lucrative.

Cunningham said the trick is finding a stable location so that “people know where to find you.” On most days, he can be found playing in the same spot at the Embarcadero station.

Newcomers, Cunningham added, tend to head straight to the Powell BART station because it’s teeming with tourists and constantly busy. “I started out there — everyone does,” he said. “But you learn after a while that quieter spots can be better for making money.”

While the musicians might be as transient as the crowd at Powell, there are a few that claim the station is their sweet spot. Schmid, for example, is “guaranteed at least $50 a day” at the busy station, where she has been playing for a year.

Playing in BART stations has some obvious advantages, such as shelter from the rain and cold and a somewhat captive audience. According to several musicians, the biggest draw is the underground’s great acoustics.

There are some restrictions on equipment and noise levels, and musicians are allowed only in the stations’ non-paid areas. All performers also are supposed to carry a free expressive activities permit, but enforcement is rare and it seems many don’t even realize it exists.

On the other hand, playing in the BART arena can be dangerous, as many musicians have to fend off aggressive beggars. As a woman playing alone, Schmit said she’s particularly vulnerable.

If successful at navigating the system, the payoff can be huge. “I can’t remember the last time I was this happy,” said young violinist Danica Hill, who quit her nine-to-five to give full-time busking a real shot six months ago.

Hill used to be terrified of playing in public by herself and took to BART to overcome her stage fright. Playing in the underground “can give you a bit of anonymity,” she said, adding that her confidence as a musician has grown tremendously and she has even landed a few gigs.