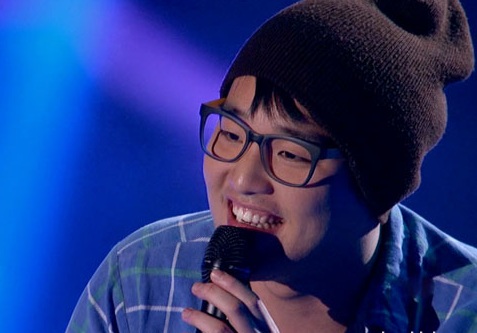 The voters are stupid. They elected George W. Bush (sort of) and now they’ve dissed the Best American Idol Perfomer Ever, wno also happens to be the only Korean to make it anywhere near this point in the show and (I think) the only Asian male.

Heejun Han is funny, has a sense of perspective, and as we saw when he made a last-ditch attempt to save his spot, can really, really sing.

Viv and I are boycotting. Actually, I’m boycotting and she’s girl-cotting. We’re never watching again, at least until next week. Heejun was, I think, the only boy she ever liked on AI, and now a bunch of lame-ass losers who sound like everyone else are heading for the final.

Okay, not Joshua, who is the best true singer in the lot, and not Elise, who kicked ass with “Whole Lotta Love” (NOBODY can sing Led Zeppelin, and somehow she did). Oh, and Jessica. Viv likes Jessica.

But the rest of them? Blech.

Let’s have Heejun Han day in San Francisco; he sings better than most of the folks who croon at the Board of Supervisors. And he’s a lot more funny.