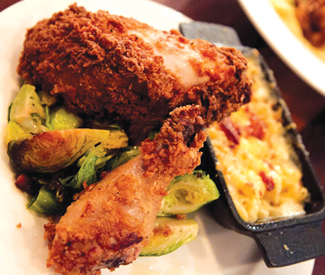 APPETITE Southern food has a profound hold on me. No, I’m not a Southerner — but few cuisines the world over elicit in me such yearning and comfort. Finding the real deal in the Bay Area is tricky, although a recent Southern trend has helped. Aside from my beloved Brenda’s and delightful Boxing Room, the following spots fulfill cravings.

Recently opened downtown, Hops and Hominy has the charm of being tucked away at the end of an alley off bustling Grant Ave. I must admit, when I saw packed crowds and a neon maraschino cherry (versus a quality brandied one) in my cocktail, I doubted H&H, opened by three Florida natives. But in this early stage, it shows promise.

Despite the cherry and too much ice, a Smoked Bacon Old Fashioned was more balanced than I expected. Using Bulleit bourbon infused with bacon, the drink is thankfully light on maple syrup. This is not exactly a cocktailian’s destination but you can get a decent beverage. Better to go with the beer menu: Dogfish Head 90 Minute IPA and Ommegang Hennepin Saison are examples of the greats they have on tap.

In terms of food, a couple dishes jump out. The most unusual for this setting is espresso-cured chocolate duck ($12). Rare duck is perched on a potato pancake with mascarpone drizzled on top. Chocolate and coffee notes are subtle, adding an unexpected seductiveness to the dish. While the potato pancake doesn’t exactly fit, it doesn’t detract either. Mac ‘n cheese is so common, but here, served piping hot in a skillet ($8), it’s oozing with cheddar goodness and typical house cured bacon. Crispy sage leaves elevate it.

Buttermilk battered chicken ($19) is not the best in town, but free-range chicken is tender and generously portioned. This dish is an ideal way to also try the mac and cheese, a companion along with Brussels sprouts. Deep water shrimp and cheesy Southern grits ($19) work but don’t recall the best of the South.

Hog and Rocks has grown into one of our great casual gathering spots, with better-than-ever cocktails and food, and a winning American whiskey selection. I’ve been a huge fan of the ham platters (the hog) and oyster selection (the rocks) since they opened, particularly when H&R offer such incredible Southern hams as one from Tennessee’s G&W Hamery, lightly drizzled with sweet Fresno chili syrup.

The impetus for recent visits was a new Scott Beattie-designed cocktail menu and new bar manager Michael Lazar. There are longtime Beattie favorites on the menu, like the fall-influenced, whiskey-apple-ginger lushness of his John Chapman. (Oh, that Thai coconut foam!)

You could do worse than finishing with an Abita root beer float — add in bourbon, if you like. Then head across to the street to new sister location, the comfy, divey Rock Bar for a nightcap.