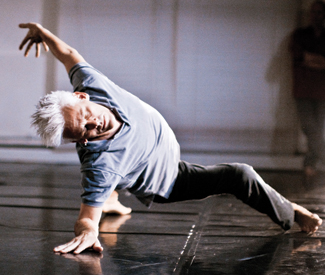 DANCE Strange how being “of a certain age” can bring so much uncertainty along with it. In the installment of Berlin-based choreographer Silke Z.’s “Just Between Us — The Generation Project” making its US premiere at CounterPULSE this weekend, two guys, at least, will move boldly forward into the middle ages.

A coproduction of Silke Z./resistdance and Jess Curtis/Gravity, Jess Meets Angus is a duet between San Francisco’s Jess Curtis and renowned Scottish choreographer Angus Balbernie, both accomplished artists now in their 50s (Curtis just barely), meeting on stage over the subject of being men and dancers in maturing bodies.

“We’re the 50-year-old guys in this larger concept that now has six generations of duets,” explains Curtis via Skype from UC Davis, where he is completing a doctorate in performance studies. (Following the CounterPULSE shows, Jess Meets Angus will have performances in Davis as well.) Silke Z. had begun the project with an encounter between two 30-somethings named Felix, hence titled Felix Meets Felix, which Curtis saw in Berlin (where he’s divided his time for over a decade now).

In asking Curtis and Balbernie — the latter her own teacher at Dartington College of Arts; he was also the bridgehead for Steve Paxton and the spread of contact improvisation in Europe in the 1970s–80s — Silke Z. is also bringing together two related but distinct traditions of postmodern dance. But the piece, which has already premiered in Germany and Lithuania with more stops ahead in Montreal and Poland, is designed to speak readily to a general audience, through text and movement, about a universal theme.

That said, traveling with the show has brought to light a sense of the social, cultural, and environmental specificity in concepts and experiences of aging. Curtis says the piece surprised, not to say freaked out people in Lithuania, for instance. One audience member explained to him that there, where the health of the male population as a whole is poorer, men in their 50s are generally “about to die,” not merely midway through life. The forthcoming dialogue from the stage was also a shock.

“The fact that we said anything about our personal lives — they didn’t even know what to do with that. I felt that people were really excited about [the work], but it is such a different vision of maleness, it’s a little confusing and challenging.”

Even Curtis admits putting himself onstage to discuss aging wasn’t entirely easy. “I had some little bits of resistance,” he says. “When I began working on the piece I was still 49, and Silke kept calling it ‘the 50-year-old guys,’ and I was like, ‘Look, I’m not 50 yet. We can call it guys around 50, or something.’ I don’t want to be rushed into that. But otherwise it made sense to me. It’s some of the first performing that I’ve done in a while. That was kind of relaxing.”

He adds, “In terms of the material, it felt quite interesting to engage with. I was simultaneously working on Dances for Non/Fictional Bodies [which premiered locally at YBCA in February 2011], so there was [connection with] those issues: yeah, this is the body I have. What are the stories in it? My father was also ill, and I was watching him age and watching things getting [physically] more difficult for him. Some of that poignancy was there too, as I was asking, ‘OK, what is the dance to make right now?'”

The honesty in the process does not necessarily imply literal truth in the text, cautions Curtis. “Yes, there’s a big autobiographical dimension, but not everything is true. We’re Jess and Angus and we mine a lot of our histories. But there were things that came up as we were improvising and trading back and forth that kind of stretched; that worked theatrically and are a deeper truth, but are not necessarily facts about our lives.”

As for how much he and Balbernie discovered they had in common when it came to the theme, Curtis is intriguingly vague: “Enough similarity and enough difference to be interesting.”